How Wolverine stars egged each other on, and about that tank ...

Liev Schreiber, co-star of the upcoming film X-Men Origins: Wolverine, told reporters that he struggled a little bit to get through the physical demands of his role as Sabretooth.

"I'll be candid here. I wasn't sure that physically I was up to this role," Schreiber said in a news conference on Saturday in Los Angeles.

Schreiber plays Victor Creed/Sabretooth, a fellow mutant who is also the half-brother of Hugh Jackman's Logan/Wolverine. Schreiber appeared with director Gavin Hood and co-stars Jackman and Ryan Reynolds to promote the film. The following is an edited version of that news conference. Woverine opens Friday.

What were your most vivid memories of shooting?

Schreiber: Early on we were shooting the first big fight sequence with Hugh and I, which was outside of the bar. Hugh and I had rehearsed day and night for this, and I'll admit, I'll be candid here, I wasn't sure that physically I was up to this role. Now I know that I am, but initially I was a little concerned. I'm sorry to say this in public, but Hugh and I being the elder statesmen of this cast, I think we were both rightfully concerned that we wouldn't be able to pull off the fight that the stunt guys had shown us. Sure, we'd been lifting weights and we looked large, but what they were asking for was truly impossible, and I just remember the third night, after shooting until six in the morning every night, looking over at Hugh, and the two of us were just so smashed up by this fight and desperate to improve but desperate to impress our small sons at home, and they said, "Would you guys like to do one more?" I remember looking across at Hugh, praying that he would say, "I'm tired. I want to go home and go to bed." And he said, "Nah. I feel great!"

Jackman: The biggest lie of my life.

Schreiber: I looked across and said, "Yeah, no, I feel great." I looked at Hugh, and they said, "One more?" And he said, "I could do two more." He looked at me, and I said, "Yeah, I could probably do three or four more." That was my sole motivation for the rest of this entire thing. 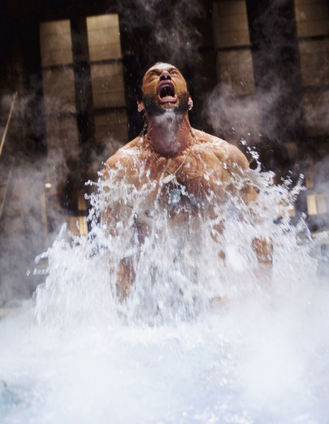 How about for you, Gavin?

Hood: For me, it was trying to figure out how to direct Hugh Jackman when he was under water and wouldn't listen or couldn't listen to a single thing I said. This tank right behind us is the real tank from the movie; I'm going to take it home, it's going in my bathroom. You can imagine being in this tank, and you'll remember from the movie that Hugh is submerged in this tank, and he goes through a range of emotions, to put it bluntly.

He enters the tank fairly nervous but calm, he sees spinning needles coming down to enter his body, he then goes through this period of escalation where his heart rate is going crazy and is starting to think he'll freak out, and then he dies, he's got to be dead. There's a lot he's got to remember as we're going along. Now you're dead, and then of course you hear someone saying they might erase your memory, and when they say "erase your memory," you kind of start coming around, and then you snap out of this tank, and you come roaring up and you are the Wolverine that everybody's wanted to see. It's the best shot in the movie: Rah! Hugh Jackman.

So how are we going to do this? Because he can't hear a thing I'm saying. So we experiment with this underwater speaker that the guys assure me is going to work, and I'm speaking through it going, "Hey you," and I'm sure he's [hearing] "bluh bluh." This is a total disaster, and he can't just do it himself, unfortunately, even though we've sort of figured out the steps, because the cameras are moving, and they've got to arrive at the place with the close-up of his ear, and now they're backing off, and so on.

So we developed a very advanced technique for this scene where I rolled up my sleeves, stuck my hand in the tank, held on to his big toe and explained to him that one grab of the toe is when the procedure begins. Two grabs of the toe, [it's] escalating, and by the time I get down to the baby toe, and I'm going to yank that thing, and that's when you come roaring out of the tank. And then he would screw it up! I'd be on toe three, and he'd think it was toe two, and he would come roaring out of the tank. How long do you want to stay under the water for?

Jackman: That shot of me coming out of the tank is actually me responding to the two dislocated toes on my right foot.