In the upcoming horror film Orphan, newcomer Isabelle Fuhrman plays Esther, a 9 year old who turns out to be trouble for her adoptive parents, played by Vera Farmiga and Peter Sarsgaard.

But the young actress says that she's unafraid of the repercussions on her reputation if audiences decide she's convincing as the homicidal little hellion. "If America hates me, then I've done my job," Fuhrman said in a group interview last weekend in Los Angeles. "That's the point of the movie—I'm supposed to make everyone hate me, and then at the same time, go, like, 'Wow, I feel sorry for her,' but 'Whoa! She's so mean!'"

Fuhrman appeared alongside her onscreen parents Sarsgaard and Farmiga at the press day for Orphan, where the three discussed the process of creating their deadly, dysfunctional family.

Farmiga (The Departed) said that she was eager to sink her teeth into the role of Kate Coleman, a recovering alcoholic who sees adoption as a form of redemption after enduing a miscarriage. "For me, when I consider a script, there's a sense of wanting to defend the character, and I had that with her," she said. "For me the appeal of the script was trying to understand miscarriage grief, and at a time when I also was desperately trying to get pregnant, so there were definitely issues that intrigued me about it. I spent a lot of time on Web sites for women who had gone through third-trimester miscarriages and was really kind of moved by the intense grief, intense feelings, and the recovery from miscarriage. The body heals before the soul does, so I saw that in my character, and I wanted to explore that."

Farmiga previously played a mother with a mysterious child in 2007's Joshua. She insisted that similarities between the roles were only superficial. "I had a great time with Sam Rockwell, and the only really similar thing is that it is a mother in distress," Farmiga said. "But I really don't feel like that my career is in danger of being pigeonholed, and the story was radically different to me. I look at the character and what her trip is, and I just found her really complex, really suffering from complex grief and trying to get over a miscarriage and the dysfunction of this family."

Farmiga also said she was immediately intrigued by Orphan's surprises. "The secret of the film, I had never read anything like that before, and I wanted to be part of that," she said. "But I wanted to make sure that whoever was going to be part of it as well could make it work. And as soon as Peter's name was thrown into the mix, I said I was in. We had been trying to find things to work on over the course of a few years." 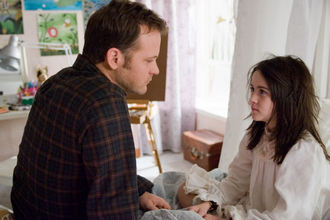 Sarsgaard said that because he and Farmiga were previously friends, and that they shared the same manager, the two of them fell into an easy, intuitive working rhythm despite the conflict between their characters. "We didn't go back and write the story of our lives together," he said. "I immediately felt very comfortable around Vera. Those sort of things you fill out from your own life, they're from what you're sensing coming from that person; I mean, it's fairly subtle, so those kinds of things just happen."

At the same time, Sarsgaard acknowledged that a lot of work went into making sure that the relationships—particularly the one between his character and Fuhrman's Esther—was believable. "There was a lot of problem-solving on the day," he said. "Because you're just trying to make sure that you don't defy the emotional logic of it to a point where anyone in the audience ever sits there and goes, 'Enh, no.' That's the only thing that's a necessary thing in a movie like this, I think, is just sort of like, make each step be a reasonable step. Let's go to the next step. The stakes are here, now the stakes are here, now the paranoia is setting in."

Esther is Fuhrman's first major role after a few small parts on TV and in other films, and she revealed that she began working on her performance even before her audition. "I had a private coaching lesson before, and mainly when I go on these coachings, I read the scripts, and I talk to them about the character, and [it] helps me figure out different things I can do. ... I run my fingers through my hair, so Esther, I thought, would maybe do something a little differently—a little more swing in her step and a little more girly because of her secret."

Once she had the role, however, Fuhrman said that borrowing a lot of her behavior from the adults around her eventually became the best way to bring the character to life. "I was observing a lot of people," she said. "I was making fun of my mom and her friends while I was watching them, and I went to lunch once with Vera, and we were looking around the restaurant, and I was watching these women, and they kept looking at me; like, why is this person looking at me? I was just looking at them to see how they crossed their legs or tilted their head or how they grabbed for their water. It just all worked; on the day, it just came into place."