If you have a few survivors roaming around the wasteland after a disaster, that's a post-apocalyptic thriller movie, right? Not so, say the makers of the upcoming The Book of Eli. Denzel Washington plays Eli, a survivor traveling burned-out freeways and ghost towns to protect a book he carries with him.

Those images sure look post-apocalyptic, but co-director Allen Hughes tried to spin it. "I don't like the word ['post-apocalyptic'] because it's such a genre word," he said during a press conference last month at San Diego Comic-Con. "We've got a great story here that's not about the post-apocalypse. It is 30 years in the future after an event, but if you don't have a good story and characters, it doesn't matter what genre it is."

Brother and co-director Albert Hughes added that they strove to give their film a look distinct from other so-called post-apocalyptic movies. They even avoided the ones that haven't come out yet.

"[We're] trying to set it aside from the other movies that are out there and find colors that work and hit your eye pretty quickly to say, 'OK, that doesn't look like, say, The Road or Mad Max,'" Albert Hughes said. "Mad Max or The Road had that color. It's as simple as that sometimes. I personally avoided even reading or looking at The Road, but I think that's a more serious kind of dramatic movie, from what I've heard. It's very depressing, so I think it's different, and I've seen some stuff lately. It's just a very different movie."

In The Road, based on Cormac McCarthy's novel, Viggo Mortensen plays a starving, ailing survivor trying to protect his small son in a post-apocalyptic landscape beset by marauding cannibals. By contrast, Eli seems mighty healthy, tearing through bad guys with martial-arts skills. Washington, who has played action heroes before, said the film tested his physical abilities. 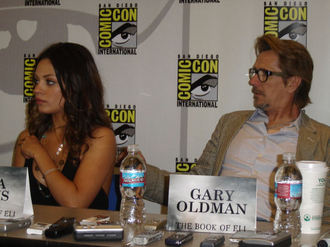 "I mean, I've done other physical films, but that's the adventure, to be able to step into other people's shoes," Washington said. "In this case, I had the opportunity to work with some really brilliant martial artists, [like] Jeff Imada [and] Danny Inosanto, who's a contemporary of Bruce Lee. So just to be able to, for six or eight months, to work out with them and to learn from them [was new]."

Gary Oldman, who plays the film's villain, Carnegie, added that Eli's disaster feels more real than those of, say, Mad Max or I Am Legend. "I think it feels very present, too," Oldman said. "You walk around thinking it can happen, like it's going to happen. I mean, since we made this movie, [North] Korea are shooting missiles in the air. We're in a very strange time. For instance, Carnegie has a source of water, of fresh water, which is really the currency, which is the commodity. It kind of is [in real life], anyway, because it's more expensive than gasoline, but it's become more so [in the movie]. So he rules because he knows where that well is. People have been pushed to extremes."

In the world of Eli, survivors will threaten you for any supplies to help last one more day. "People kill now for things they used to throw away," Washington said. "There are a few meat sandwiches. I'll leave it at that. There are some meat sandwiches that are eaten in the film. I didn't say I did. I just said there were meat sandwiches."

The only hope in this desolate landscape is Solara (Mila Kunis), the young character who realizes that even people hardened to a desperate world can change. "Gary Oldman plays my stepfather and uses me to seduce Denzel's character," Kunis said. "In return, I become infatuated by him and his belief and the man that he is, because he's not abusive. She decides to escape and follow him and, I guess, maybe becomes his people. [She] just wants to follow him on his journey, be like him, be inspired by him and escape from the small town."