Astronomers have long known that our solar system came of age during a violent time in our universe, but even they seem to have underestimated just how violent. Two NASA probes have just produced an extremely high-definition "gravity map" of the moon, and it reveals that the lunar crust was once torn to shreds by impacts.

Apart from looking really, really cool, the map generated by NASA's twin Grail (Gravity Recovery and Interior Laboratory) probes shows that the moon's crust is much more perforated than we previously thought. It's thinner too, only 21 to 27 miles thick, much less than estimates that placed it at up to 40 miles thick. What does all this mean? Well, in the early days of the solar system, the moon was just plain pummeled. 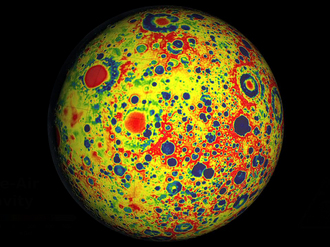 The Grail map "really opens a window to this early stage of just what a violent place the surfaces of all terrestrial planets were early in their history," said Grail principal investigator Maria Zuber of MIT.

As Zuber noted, the data collected from the moon suggests that nearby bodies like Earth, Mars and Venus suffered similarly violent pasts, but it also provides further evidence that the Giant Impact Theory for how the moon formed is correct.

During their mapping mission, the Grail probes discovered linear formations of solidified magma beneath the lunar surface that only could have formed if the moon was heating up and expanding, which is consistent with the Giant Impact Theory that a Mars-sized object once crashed into the Earth and propelled molten debris out into space that later formed the moon.

"The process of building a moon out of that debris should result in a situation where the moon is cooler on the inside and warmer on the outside," said Grail guest scientist Jeff Andrews-Hanna of the Colorado School of Mines. "And then what naturally happens is that the interior will warm up and expand during that first billion years.

"This had been predicted theoretically a long time ago, but there was no direct observational evidence to support this period of early lunar expansion until this Grail data."

The Grail data also adds weight to the theory that an ocean that used to be on the Martian surface actually retreated underground through cracks in the surface. If Mars was impacted as heavily as the moon, the ocean very well could have drained into the planet.

The $496 million Grail probes are still circling ever closer to the moon as part of their extended mission that's scheduled to wrap up later this month. They'll then be crashed into the lunar surface.