Infographic: 6 years of Doctor Who in one mind-warping image

It's hard to create a timeline for a time traveler, especially for one as wibbly-wobbly as Doctor Who's the Doctor. Graphic artist Nathanthenerd has managed to succeed where lesser minds would have melted in timey-wimey confusion.

This graphic takes into account all of the actions of the Doctor and his companions since 2005, when the show had reawakened from the nine-year slumber begun when the 1996 Doctor Who TV movie starring Paul McGann failed to take off. It's not as easy as it sounds: The characters in Doctor Who have parallel lives, with adventures on other TV shows.

You know how every map has a legend? When we saw this, we were initially puzzled by the "Key to the Timeline" before realizing that it was the description of the graphic. Our first thoughts went to the fourth Doctor's story arc in 1978. 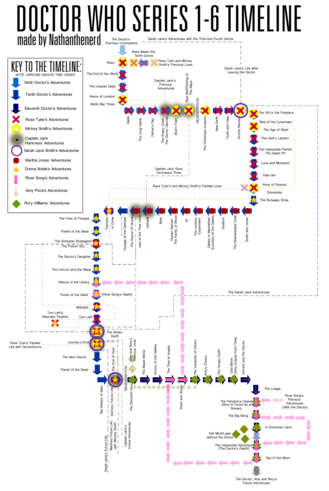