Infographic: So which sci-fi fandom is the most Internet active?

You may think the Internet was built to network various DARPA facilities together, but actually, it was built for people to talk to each other about sci-fi. And gaming. And all sorts of nerdly delights. But one group of fans seems to have more Internet traction than the others ... and according to this infographic, that group loves Harry Potter.

In fact, according to data culled from Facebook likes, eBay sales, fan wiki entries and, um, fanfiction.net, Harry Potter has only a slightly smaller fandom than all other fandoms combined.

Jared Padalecki & Jensen Ackles’ Supernatural hubbub stressed out fans, and they're letting the duo know
Is Zack Snyder's Justice League good? Yes. Is it worth it? Well...

We're aware that this infographic isn't definitive; for example, the only anime represented is Pokemon, and videogames are nowhere to be seen. However, it does tell us that Harry Potter fans are more active on the Internet than other fandoms, along with the second-largest fandom, Twilight.

However, the number of fans for other fandoms, such as Doctor Who and Star Trek, may be greater than these statistics show. These fandoms predated the Internet, which means they may have less of an Internet presence, as younger fans tend to spend more time online creating fan art and updating wikis.

And as for entries on fanfiction.net as a measuring stick ...Star Trek fans had famously written over two decades' worth of fan fiction years before they thought to put it online.

Still, it's an entertaining infographic. Check it out. 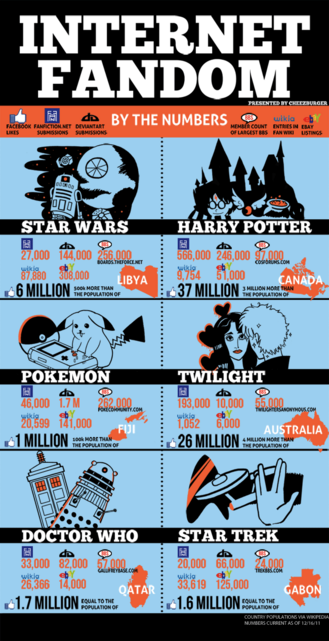