Infographic: The tortured 73-year history of The Hobbit film

Although the film version of The Lord of the Rings was a massive worldwide success, getting J.R.R. Tolkien's prequel, The Hobbit, to the screen has proven much more difficult. With the rights finally sorted out after being tied up for years and a studio feud with Rings director Peter Jackson resolved, the project finally began moving forward in 2008—only to be stalled this year by the looming collapse of MGM, one of the two companies financing the production, should it fail to find a way out of its $4 billion debt.

As the world waits to see whether The Hobbit actually gets made into a movie, we thought it would be helpful to put together a timeline of the book's long and complicated march to the screen ... a march that is still in progress and moving one painful inch at a time.

(If you like the graphic, please spread the word, but we'd appreciate if you'd credit us and link back to our graphic instead of just reposting it.) 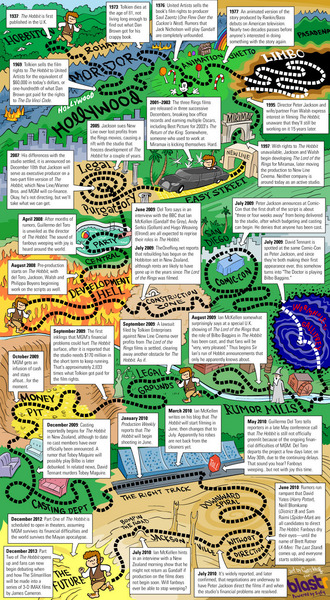