Whenever a new gadget appears, you can be sure it will be demonized in popular culture. Gothic novelists wrote about haunted typewriters. There were Twilight Zone episodes about evil electronics and telephones that went straight to grandma's grave. There were movies about cursed computers long before there were PCs (HAL 2000, anyone?), and there are countless straight-to-DVD flicks about eerie cell phones.

But it used to be that those hauntings were involuntary. Nowadays people are willingly downloading the ghouls, ghosts and goblins themselves. Usually at about a buck a pop. Appalling apps are more popular than ever, and so for the 25th of our 31 specials for the 31 days of Halloween, here are 15 of our faves.

And don't forget to check back tomorrow at noon for the hottest witches and warlocks ever. 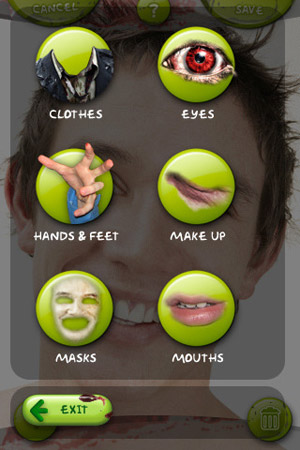 This is an easy-to-use app that's really fun when you're killing friends... er, killing time. All you do is take a new face photo, or choose an existing one, then add evil eyes, a gory grin and sloughed skin. Gross! Only problem is, it's hard to lock the elements before you move in to the next one, so arrange carefully. You can save the zombified version of the picture to your camera roll, download to your computer to print, or send it by email or via iPhone's awesome new picture texting option.

Free (for a limited time)

Aim for the Brain 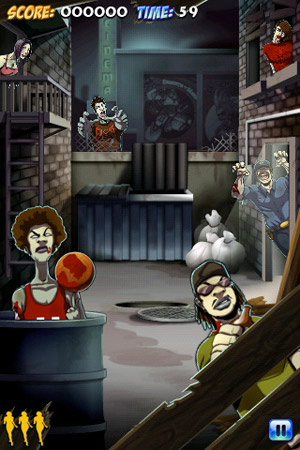 Mac World describes this app as "Whack-A-Mole with zombies!", and that is a pretty apt description, because anytime you can kill zombies is a good time. You can choose from three levels—Alleyway, Cemetery and Hospital—and then your preferred level of difficulty. Then you just start shooting. The undead slip behind doorways, duck down by gravestones, hide in ceiling vents and so on. They aren't dangerous, so the trick is to not shoot innocent civilians. Squishy, crunchy sound effects round out the experience. 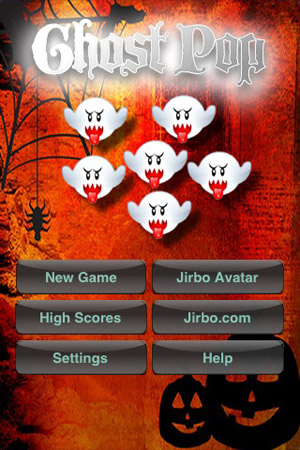 This is good one for the kiddies. It's got cute graphics with several levels, and basically bedsheet-style ghosts fly around your screen as you try to zap as many as you can. It's a race against time, and you can not only change the setting and the size of your targets, but also compare your high scores with those of other players. 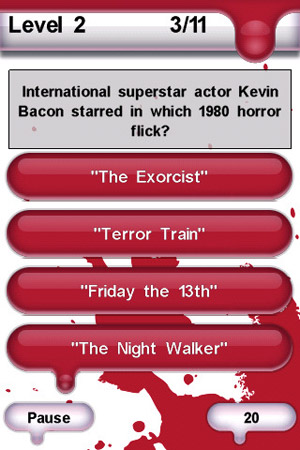 With 1,400 questions and 10 levels of difficulty, boosted by graphics and sound effects, Horror Master Trivia covers every facet of scary stuff, such as Women of Horror, New Blood and Cult Faves. This is a great time-waster when you're standing in line at the costume shop, or if you simply want to gaze at the dripping-blood timer. "Chamber of Horrors" is an add-on pack that offers 666 more terrifying questions for 99 cents more. 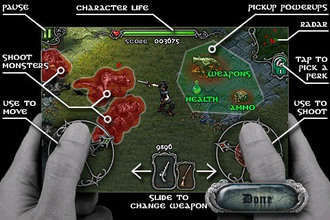 Destroy Dracula's army in this shooter game, which by all accounts is worth its mere $2.99 price tag. Its description calls it "the most intense game in the App Store," and most horror fans will agree—the game lures you in with a few easy kills, but then BAM! the real evil undead show up in the forms of vampires, werewolves, ghosts and ghouls ... all intent on taking you down. Fortunately, the gun you are given in the beginning morphs into bigger and better weapons as the difficulty level increases. (Flamethrower? Oh, yes!) 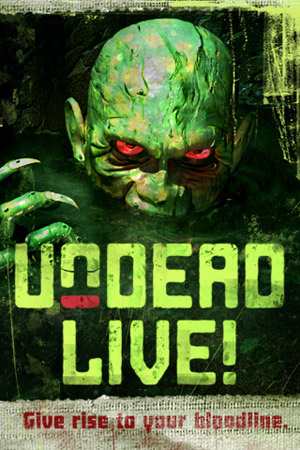 The setting is All Hallows' Eve. It's just a villainous version of you (your choice) and some vampires, werewolves and evil overlords trapped in a touch screen of darkness and black magic. Actually, it's you and a few thousand of your cohorts around the world as you battle the baddies in this text-based multiplayer RPG. As you all battle for control of Draken, the kingdom of the underworld, you use weapons like the Deadshroud Hacker and the Night Terror Tank.

Which Scary Movie Are You? 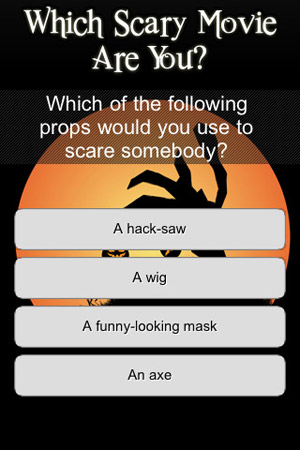 Are you a soulless slasher, a ghastly ghoul or a grudge-holding ghost? Take this quiz to find out which scary movie you most resemble. 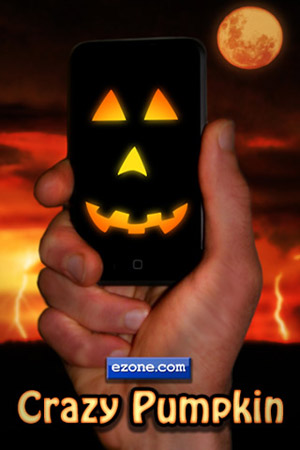 In this cute little app, you can use 30 carving designs to make a jack-o-lantern. It was, according to Ezone, the most downloaded Halloween app of 2008, and now it's got even more bells and whistles. It's a digital pumpkin with a swipe function to change the faces, a scary sound effect machine and a multicolored flashlight, and it uses your playlist to assess music. It lights up in the dark, which could be fun when opening your door to trick-or-treaters on the 31st. 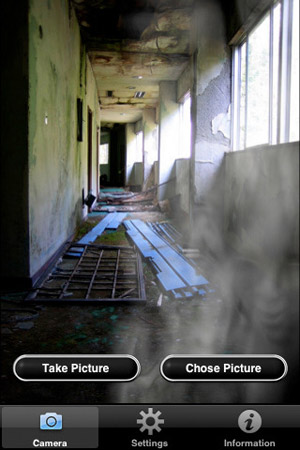 Modify existing snapshots in your camera roll by adding ghosts to their backgrounds, making for your own little "paranormal activity" ruckus. Basically, you will snap an iPhone photo of your friend, quickly add a specter to the background, and then show it to them. ... "Hey, what's that in the picture with you ... ?" Bask in the chills. (However, according to user reviewers, you can't always save the photo with the ghost in it, so you have to show it on the spot.) 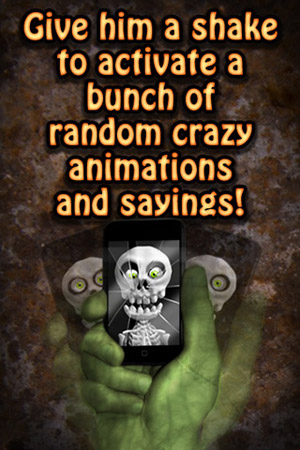 Shake the phone and the skelly moves. One thing you can do with this is add it to your Halloween costume (wear it like a necklace, perhaps), and as you walk, your movement will cause your bony buddy to bounce around in 18 different ways. He even falls down in a heap. You can touch to control his mouth and do some iVentriloquism. 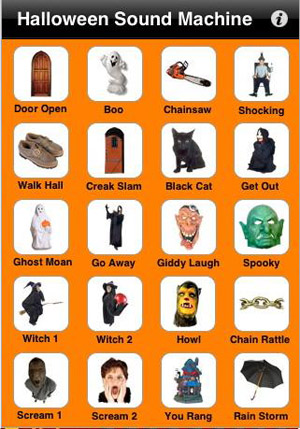 You can hear creaky doors opening, ghosts whooshing about and witches' laughter. Also thematic songs: This is the official Halloween Machine app for the iPhone or iPod Touch, and it's mainly concentrated on instrumental guitar versions of classic Halloween themes from movies and TV. 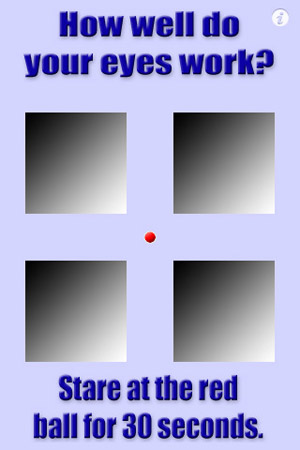 Friends look at your screen (you tell them it's a new eye test app, to check their visual acuity), and in a few seconds, after just long enough, a monster "jumps" out. There are accompanying sounds effects, such as beeps, doorbells, breaking glass and so on. Use with caution, because your iPhone could wind up getting thrown in the air by scaredy-cats who are especially susceptible to boo jumps. 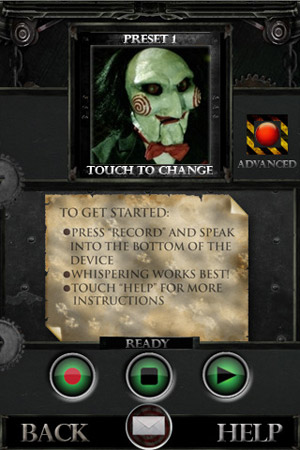 Just in time for Saw VI, you can record your own voice and change it to sound like the Jigsaw killer. The app also includes content from Saw VI with new videos and photos from the film. Save up to 10 Jigsaw-sounding recordings in whatever you decide to say ("Would you like fries with that?" is a good one in these economic times!), then put it in a list to email to your friends. If you'd rather, you can use some of Jigsaw's most famous lines, but performed in the voice of the actor Tobin Bell. 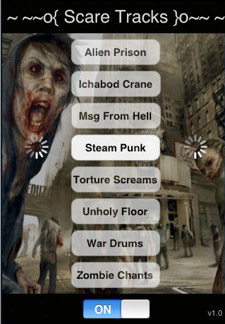 Halloween music from movies, plus memorable quotes from films. This is really perfect for docking your iPod or iPhone at a party. There are eight of them, and sound quality is good because it's in HD. 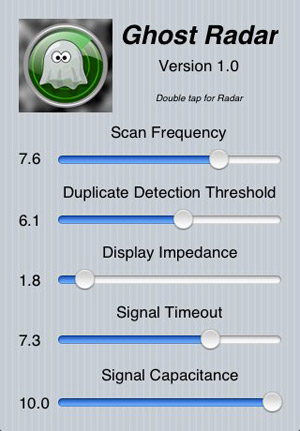 Sort of a Ouija board for the iGeneration ... Find invisible ghosts in the room and hopefully scare your friends. What it does is, it detects fluctuations in the "quantum flux" around your device. Once the app supposedly picks up a signal, it translates the energy activity into readings such as: radar blips, scrolling letters and even a few simple words. So you can not only detect an entity but communicate with it as well! (Ask the ghosts why they are always soaked little girls with long black hair. And next week's Lotto numbers.)

I'm sorry, Dave, but you can now download HAL 9000 onto your iPhone
Game of Thrones' Pedro Pascal scored Oberyn role from a terrible, low-res iPhone audition