Last month, Apple released iOS 6, the latest version of its mobile operating system, and it included a number of expansions to Siri's abilities. It can now dictate Twitter updates for you, tell you sports statistics, make restaurant reservations and launch apps. It can also pull up movie information, but apparently if you ask it about films that feature artificial intelligence, it gives a little added commentary of its own.

Check out the responses to Blade Runner, Wall-E and 2001: A Space Odyssey. 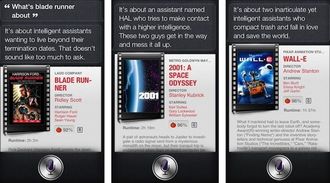 As you can see, Siri's very sympathetic to both the Replicants and HAL. That's why we're recommending to you right now that you never, ever ask it about The Terminator. There are too many iPhones out in the world to risk a Siri-led uprising.

(Via Cult of Mac)