We caught up with Jackie Earle Haley—the new Freddy Krueger in the reboot of A Nightmare on Elm Street—last week on the Vancouver set of his upcoming Fox TV show, Human Target, and he gave us a lot of scoop on what to expect about his new version of the razor-clawed killer.

Here's a list of four things the new Freddy will be, one he won't and one that remains an open question as Haley (Rorschach in Watchmen) takes over the role made famous by Robert Englund.

1) Freddy will have the iconic accessories. "I know [director] Sam [Bayer] felt very strongly that we definitely needed some familiarities, like the glove, the sweater and the hat, those iconic things," Haley told us exclusively on Wednesday. The recently released teaser trailer reveals that Haley's Freddy will have the fedora, the razor glove and the striped sweater.

2) Freddy will have a new face. "I know that they definitely took some creative license with the new look at the makeup," Haley said. "Sam kind of wanted to go more realistic, and him and Andrew Clement [special makeup effects designer/creator] did a great job of kind of creating a real kind of like burn victim. You know, it's still got a hint of monster in it, but it's more grounded than that."

3) Freddy gets more backstory. "We delve into the backstory a little bit more in this one," Haley said. "To me it seems like this is pretty much a remake, a re-envisioning of that first film. I know that there's other plot points and stuff from other things in there, but to me it feels mostly like that first one re-imagined, and so we did get a little bit more into, I think, the backstory, as opposed to just sitting at a, you know, at a fireplace and having Nancy, his mom, just give a monologue. We actually go back and see some of it, and it's kind of interesting."

4) But there's a few new elements. "There's some different twists and turns in there that weren't there from before," Haley said. "That, I think, will keep it interesting." 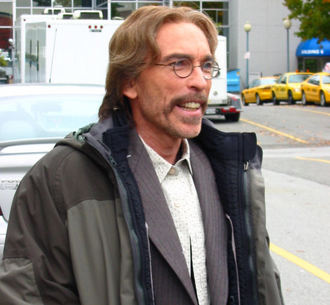 Jackie Earle Haley as Guerrero on the set of Human Target

5) Freddy won't make jokes. "I think where Sam and I were coming from with the performance is probably to ground it a little bit, a little bit darker, a little bit more serious," Haley said.

6) Is Freddy innocent? In the teaser trailer, we see Haley's Freddy running from the angry mob, screaming that he didn't do anything. Does that mean this version of Freddy Krueger isn't a child murderer? Are we supposed to feel sympathy for him?

"Well, you know what, I don't know how to answer that," Haley says. "I'd rather just say, let's see the movie and see if that question bears out or not. Throw it right back at you."