Is Brian Austin Green's Cross the worst superhero film ever made?

Remember when Brian Austin Green popped up on Terminator: The Sarah Connor Chronicles and surprised the hell out of everyone by being thoroughly convincing and totally awesome? Yeah, judging by the trailer for his new comic-book movie, those were the days.

Before we go any further, here's what Sony Pictures has to say about this new DVD:

"When beautiful, young women start disappearing from the streets of L.A., it's time for good-guy Callan (a.k.a. Cross) and his crew of weapons experts to kick into high gear and take out the trash. Granted incredible power by his ancient Celtic cross, Callan must fight to stop an immortal Viking from destroying mankind with his doomsday device."

It kind of looks like an episode of The Cape, what with the big black guy with the deep voice (Michael Clarke Duncan, basically doing Kingpin) and Vinnie Jones as a scheming villain. It also adds Jake Busey and Tom Sizemore, for additional has-been power. 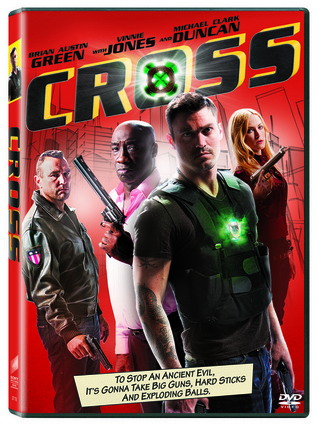 What makes this so depressing is that Green showed such promise on Terminator. He was absolutely convincing as a war-weary freedom fighter; so much so that I just figured it would open a whole new career path for him, where he could be more than the guy who used to be on 90210. I bought him as a hero ... I guess I can just watch the T:SCC reruns on Syfy.

As for Brian Austin Green, I suppose he can always take solace in Megan Fox's arms.