Why Drag Me to Hell's star disagreed with director Sam Raimi

We don't want to spoil the ending of director Sam Raimi's upcoming horror movie Drag Me to Hell, so if you don't want to know, don't read any further.

But Raimi told reporters that he intended the audience to go along for the ride with his protagonist, Christine (Alison Lohman), all the way to the end.

The choice is this: Christine works at a bank and is eager to earn a promotion. When the creepy old lady Mrs. Ganush (Lorna Raver) begs for a third extension on her mortgage, Christine denies it to show her boss she can make tough decisions. What she doesn't know is that Mrs. Ganush has the power to exact revenge in the form of a curse: After three days, Christine will be sucked into hell. Unless she can take a few steps to ward off the demon, the Lamia, that is after her.

"The old woman was unpleasant-looking, was absurd," Raimi said. "I wanted the audience to say, 'Yeah, just deny her the loan and get her out of the office, for crying out loud.' Because I had hoped that once you sinners had made that choice with her, that, like it or not, you would know in your heart that that thing that had been sicced upon her was not just coming for her, but deservedly so for you, because you had made that choice with her. That ending, when it came for her, although it may be a surprise or not, you'd know that it could've come for you, too."

For her part, Lohman, of course, defends her character's choice. "Her boss is pretty much telling her that she has to fill a quota and not give her the extension, to save money, probably, for the bank," Lohman said in a separate interview. "My character has her own agenda, so she definitely has enough rationalities to justify why she does what she does. I definitely think you can sympathize with both characters, really."

Well, it's Ganush's third warning. Even magical gypsies have to pay their bills on time, right, Sam? "Sure," Raimi said. "There are all sorts of reasons to be greedy and cruel to other people. They can be justified by logic, or you could use the rules of an institution or a government or the military. There are all sorts of reasons to torment and be cruel to others, justifiable, wonderful reasons. That's another one: that she had been given an extension twice before. Did she really expect a third one? Did she really expect mercy after she'd been shown some? It's another way for people to hide behind their choices."

Lohman doesn't buy it. "He and I disagree sometimes," she said about Raimi. "Is he taking Lorna's side? I never saw my character as a bad person. It was always hard to [say], 'Oh, when do I make the decision that my character finally repents?' Yes, of course, she was greedy and she did not give her the extension when she should have. But does she deserve to be dragged to hell? No, I don't think so." 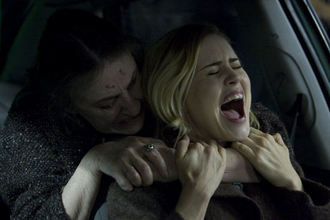 Christine still tries desperately to avoid the consequences of her action. Raimi listed specific events from the film that support his perspective on the character.

"When you think about what she does besides throwing that old woman out of the house, she goes against her own vows and kills that cat to save her neck," he said. "She lies to the old woman's daughter at that house when she tries to get her way and get the old woman to take the curse off her. At the seance, when she's asked everyone to risk their lives for her, she tries to blame her boss when confronted with the demon. She in fact is ready to give that curse to some poor sap at the local Howard Johnson's or Denny's. She barely came up with a better idea. She came that close. I think she was a good person on the outside, but when you really start to look at her, when she gets in an extreme situation, the real person comes out. In fact, it's really the old woman that's the victim in this story. I think her character, Christine, deserved, probably, what she got. Maybe she was a little over-punished. I wouldn't have been as harsh, personally."

Lohman finds Christine's actions empowering. "I loved that about my character," she said. "I loved that part. My character's submissive to her boss, wanting to please everyone, and then just takes charge, trying to survive. I love seeing that dynamic. I find that interesting to watch on film, and I think I see aspects of myself in that. I kind of wanted to draw on that a little bit."

Decide for yourself when Drag Me to Hell opens May 29.