You've got to wonder if Dr. Nicholas Rush (Robert Carlyle), the single-minded genius on Syfy's SGU: Stargate Universe, is on the right show. Maybe he hopped over from Caprica before anyone noticed and now it's too late. However it happened, Carlyle's character is so morally ambiguous we don't know if we can trust him.

Looking at his deeds just in the six episodes that have aired so far, you really have to wonder: Is he evil? Maybe not evil like Darth Vader or the Master, but evil like Battlestar Galactica's Gaius Baltar or Lost's Ben.

In the very first episode, Rush claims he didn't dial Earth because of the danger to Earth in dialing from a volatile planet. OK maybe. But he also sent dozens of people into an unknown situation that just happened to be the dilapidated Ancient ship, the Destiny.

Over and over again, we question the motives of this Machiavellian scientist, who too often seems willing to sacrifice people to make sure he can continue his life's work, which includes exploring the secrets of the Stargate and now the Destiny.

Executive producer Brad Wright has said people aboard the Destiny are "in a position where we have to trust the son of a bitch who put us in this situation, because he has a lot of the knowledge that we need just to stay alive."

It shouldn't surprise us that the amazing Carlyle has been so convincing as Rush, considering he's played everything from a policeman to a psychopath to a male stripper to a James Bond villain to a cannibal to Adolf Hitler! There's no denying the Scottish actor has range, and it's range he's put to good use as Dr. Nicholas Rush.

Here are some of the questionable things Rush has done on SGU since the pilot episode. SGU airs tonight at 9 p.m. ET/PT. 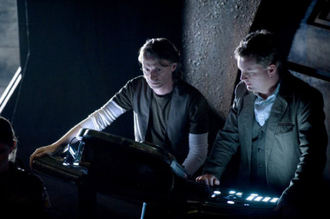 In "Air, Part 2," Rush used the communication device to contact Earth and returned to the Destiny with news that Lt. Gen. Jack O'Neill (Richard Dean Anderson) had put him in charge of the expedition. Fortunately, the people onboard did not believe him, and Col. Young (Justin Louis) soon got better enough from his injuries to squash Rush's power play. 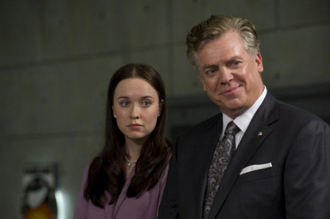 When Sen. Armstrong (Christopher McDonald) sacrificed himself to save the Destiny's air supply by closing a door to a damaged shuttle in "Air, Part 2," it didn't seem to bother Rush one bit. In fact, before the Senator took it upon himself to save the day, Rush suggested they rate the people aboard based on their skills, so they could determine who was most expendable to be sacrificed. What a guy!

So not a hero. 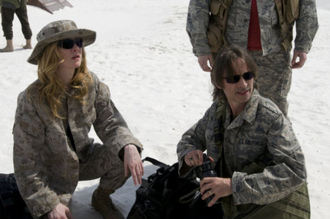 When the Destiny dropped out of faster-than-light drive and found a planet with the lime needed to fix the air filter problem in "Air, Part 3," Rush went with Lt. Scott (Brian J. Smith) and others to the planet. He quickly became a liability and was unable to continue. On the way back to the gate with Greer (Jamil Walker Smith), Rush taunted him and seemed ready to give up. On the other hand, Scott nearly died trying to find the lime. Of course, Scott's a hero.

Willing to sacrifice others. 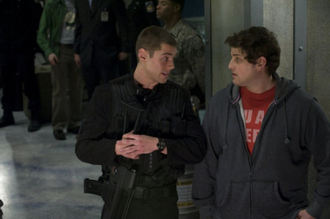 During the same episode, when Palmer, Curtis, and Franklin decide to take their chances on another planet, Palmer and Curtis go through the Stargate. In order to stop Franklin, Rush orders Greer to shoot him. Franklin took a bullet to the shoulder and was most likely spared death on the planet. But was Rush's interest in stopping Franklin to save him, or perhaps because Franklin had the only Stargate remote control? And when the Stargate's about to close and the Destiny's about to leave, Rush tells Eli (David Blue) to put his hand in the gate to keep the event horizon from closing, while Greer and Scott are rushing toward him with the lime. But is Rush trying to save them ... or get the lime? 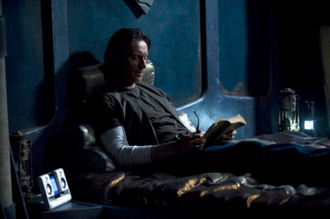 When the ship's power begins to run out in "Darkness," Rush struggles for days to solve the problem without sleep, coffee or nicotine. His nervous breakdown proves he's human, although it doesn't solve the problem.

Messes with their minds. 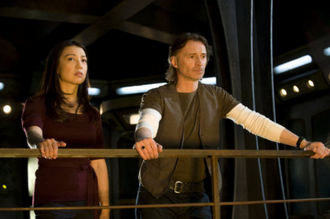 The Destiny suddenly heads directly toward a sun, and it seems like everyone's doomed in "Light." With only one working shuttle, Young decides to hold a lottery offering a handful a chance to live on a nearby planet. Rush takes himself out of the running, saying he's going to go down with the ship. But when the people aboard the ship don't die as the Destiny sucks up power directly from the sun, Rush is the first to figure out that the ship is solar powered. Having survived certain death, Young comes to believe that Rush may have known all along that the Destiny wasn't about to meet its destiny. (Well, actually we figured it out at the beginning of the episode. We must be geniuses.)

Unmoved by sacrifice, the sequel. 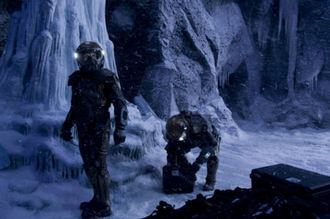 When the Destiny's water supply mysteriously begins to disappear in "Water," Young and Scott try to harvest water from an ice planet. When Scott is trapped in a crevasse, Rush tells Young to leave him and bring the ice back to the ship. Of course, Young (who's also a hero) isn't about to sacrifice young Scott. And with a little earthquake and a little determination, he doesn't have to.

Doesn't want to be rescued? 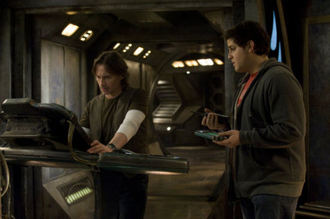 In tonight's episode, "Earth," IOA scientists hatch a dangerous plan to get the crew back to Earth. Since Rush's plans most likely don't include going home anytime soon, we don't think he's going to be happy.

So what do you think? Is he selfish, brilliant, devious or just plain evil?