(This is the first of two posts dealing with the question of whether The Last Airbender is discriminatory.)

Amidst a pop culture milieu of Camelots and Middle-earths, Nickelodeon's Avatar: The Last Airbender was an award-winning animated series showcasing a Pacific Rim fantasy world. Many fans hoped the series' authentic and respectful depictions of Asian and Inuit characters and cultures would carry over to M. Night Shyamalan's upcoming film adaptation of the series, called simply The Last Airbender. These hopes were dashed when the production opted to cast white actors to play the show's lead characters of color. Fan intrigue about how the film would handle "airbending" quickly turned into critiques of the film's "racebending."

Two summers ago, the production of The Last Airbender released casting calls reading "Wanted: Caucasian or any other ethnicity" in all of the major professional listings and on the film's official casting site. In December 2008, the production cast white actors to play the film's lead characters—erasing the characters' East Asian and Inuit ethnicities.

Fans, industry professionals and Asian-American advocacy groups mobilized in winter 2009 and repeatedly contacted the production with concerns, to no avail. More than a year later, the production still has not acknowledged the full impact of its actions. If not in a franchise like The Last Airbender, then what other opportunities do actors of Asian and Inuit descent currently have to star in Hollywood blockbusters? Are there even other media franchises featuring Asian or Inuit characters in starring roles?

(Never mind, don't answer that. Dragonball Z, King of Fighters and 30 Days of Night had Asian and Inuit lead characters—and they all got the racebending treatment, too.)

Shyamalan has been trumpeting his film as a paragon of diversity, ignoring the wide gulf between diversity and equal representation. In March he told fan sites that The Last Airbender could be "one of the most diverse movies of all times." Hardly. Yes, eventually, the production did make room in The Last Airbender for Shyamalan's brand of "diversity"—but casting people of color in villain and background roles is hardly revolutionary.

In February 2009, pop star Jesse McCartney was abruptly swapped out for Dev Patel (Slumdog Millionare) as the lead antagonist. The production began stacking—in the words of the filmmakers—"Near Eastern, Middle Eastern, Far Eastern, Asian, Mediterranean & Latino" actors to play the rest of the movie's genocidal Fire Nation. Where was the casting call for actors from these communities when Airbender was casting for the three lead heroes? 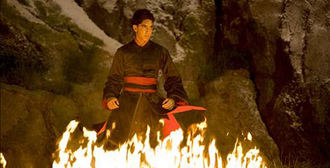 This discrepancy is not because films cast for "the best actor for the role" and that best actor always happens to be white or male. Something more insidious is at work, a Hollywood hierarchy of expectations and discriminatory bias. Hollywood continues to privilege actors who are male and white with more work opportunities. As a result, equally talented women and actors of color are denied voice and the opportunity to represent their communities.

The silver-screen practice of casting white actors to play people of color is certainly retread ground for fans of science fiction and fantasy, who have seen franchises such as Earthsea—and this summer's The Prince of Persia—also get the "racebending" treatment.

In these situations, a bastardized adaptation marked a favorite franchise with Hollywood's legacy of racial discrimination, incensing and alienating loyal fans. Moviegoers are tired of being pandered to with the assumption that they are so prejudiced they cannot enjoy a film with an "ethnic" lead protagonist. Fans of The Last Airbender are choosing to speak out against the movie's decisions, boycotting so as not to financially reward the production for its decisions.

A summer blockbuster film with a young Asian American and Inuit American lead cast, coming soon to theaters near you? Such a film doesn't exist, but the opportunity did—until the production of The Last Airbender decided to squander it. Audiences will have to choose between supporting a favorite franchise and taking a stand against discrimination. Pick your poison.

Marissa Lee is one of the co-founders of Racebending.com, an online community and grassroots organization of Avatar: The Last Airbender fans dedicated to encouraging fair casting practices and equal opportunities in Hollywood. She lives in Los Angeles with one boyfriend, two guinea pigs and too many Star Wars books.