What we saw on set when The Crazies invaded Georgia

It is an unseasonably chilly night in rural Georgia. The setting is Peach State County High School in the remote town of Fort Valley, Ga. Tonight this sleepy locale is anything but. Outside the high school, in the large fields usually reserved for football and baseball, all hell has broken loose. Large military caravans sit outside fenced internment camps. Military personnel wield automatic weapons and wear shiny green biohazard uniforms as they herd prisoners into the camp. Helicopters charge overhead, shining spotlights on the yellow school buses that bring in more captives.

For any passerby unaware of the film shoot currently in progress, the scene could appear to be the first sign of the apocalypse. Thankfully, most of the town is not only aware of the big Hollywood production, but also joining in the fun as extras in tonight's extravagant scene from The Crazies, a remake of the 1973 George Romero film of the same name. Directed by Breck Eisner (Sahara), tonight's scene features hundreds of extras, the most logistically complicated portion of the entire shoot.

How the The Crazies is scary, violent, funny and 'F-d' up
New Crazies: bigger, scarier, nastier

SCI FI Wire was among a group of reporters invited to the central Georgia set on April 7. Although the film takes place in Ogden Marsh, Iowa, recent 30 percent Georgia tax breaks made the state a logical double for the bulk of shooting.

Instead of the usual tight spaces of a horror production, Eisner chose to take advantage of the wide open spaces. "I wanted this idea that our heroes are not trapped in small boxes, but open spaces that go on for miles and miles and miles," Eisner said. "There's literally nowhere to hide."

Like the original, the remake begins when a chemical weapon is dumped into the water supply of a small town (Evans City in the original), and the resulting infection causes a form of murderous craziness.

"In this scene, we're basically heading to the concentration camp, and we don't know what's going to happen to us," Mitchell tells reporters. Mitchell's character is pregnant, a plot device that comes into play during tonight's dramatic scene. "The people that appear to be sick are being pushed in one direction, and the other people are being pushed in the other direction. [My character] has an elevated temperature because she's pregnant, but of course they don't believe that, or they don't care. So she's going in one direction, and [my husband] is going in the other, and it's hopefully going to be quite dramatic." 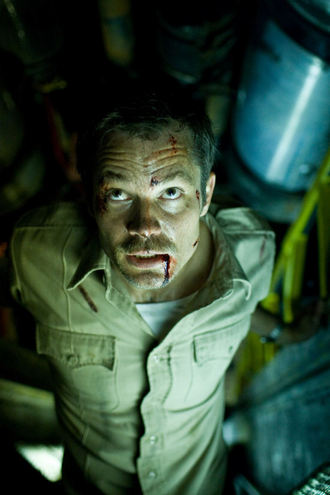 Shooting continues as rain pours down to add an extra dose of discomfort to the night's almost freezing temperatures. As it turns out, it's only "movie rain" being sprayed across the set from behind the football scoreboard, but that doesn't make it any less unpleasant. Large lines of extras are being herded by production crews from place to place, not entirely unlike the characters being herded by the military personnel they will play in the film.

In Romero's original, the military perspective was a focal point, but Eisner is foregoing the military point of view. "To me it was much more interesting being in the point of view of our townsfolk," Eisner says. "[The military is] this oppressive, nameless, faceless force."

To create the look of the "crazies," Eisner and makeup designer Rob Hall tried to avoid anything zombie-like, instead referencing actual medical conditions such as Ebola, tetanus and rabies. "The challenge for us was making them look interesting and iconic," Eisner says. "[But] not so far over the top that you don't believe that it could be a sickness that made this happen."

The crazies of this night's shoot are in the early stages of the disease. Sadly, this means we don't get to see any exemplars of the latter stages of the disease, only a few reference shots in Hall's makeup trailer. "They're almost like they're the opposite of dead," Hall says. "There's too much life in them, so they're, like, bursting at the seams. Their faces are red, and there are blood blisters and veins, and they're very vascular."

Also in the trailer are a few crazies dummies. An obese man in overalls sits on the floor, the lower half of his jaw detached and his tongue hanging out limply. Hall invites the reporters to touch the sticky fake tongue. Another dummy is the town's mayor, who has been strung up and killed. The dummy bears a striking resemblance to Ron Howard.

When the disease takes hold, it brings out the worst in its host. Rather than mindless zombies craving human flesh, the crazies manifest the worst traits of the individual: Whatever bad tendencies a crazy possessed before the illness, they rise to the surface and bubble over in attack. Eisner on the crazies: "The idea for me was of this disease, when you get infected, it unlocks these deep latent qualities in people, and it brings them to the forefront."

The Crazies is eyeing a Sept. 25 release.