It's official: Amazing Spider-Man 2 has found its Harry Osborn

Marc Webb has dropped a bomb on us. Today, The Amazing Spider-Man director made a major casting announcement. After weeks of waiting, they've officially found their Harry Osborn.

Just minutes ago, Webb confirmed that Dane DeHaan would play the coveted role. For those of you who've been following the story, this isn't a shock. It was previously revealed that DeHaan, as well as Brady Corbet (Melancholia) and Alden Ehrenreich (Beautiful Creatures) were in the running. It also didn't help that DeHaan was spotted around town with Spider-Man himself, Andrew Garfield. It doesn't take much to put two and two together.

Like Garfield, DeHaan is a talented young actor. He's best known for his performances in Chronicle, and Lawless alongside Tom Hardy and Shia LaBeouf. The last time Harry Osborn appeared on the big screen, he was played by James Franco.

The character has a pretty complex relationship with the webslinger. Harry's the son of Norman Osborn, aka the Green Goblin. He's also Peter's best friend, who eventually goes to the dark side to become a villain himself. 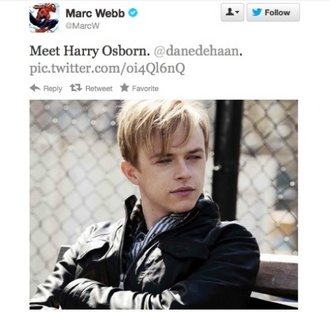 What do you think of the new Harry?