Executive producer and co-creator Jaime Paglia has one whopper of a final season planned for you when Syfy's Eureka returns Monday at 9 p.m. But first there's that enormous cliffhanger from last year, which will require a three-episode arc to resolve.

And even then, "everybody is dealing with the ramifications of what happened in the first few episodes. That will have an impact on everybody's relationships for the remainder of the season," said Paglia, in an exclusive interview with Blastr.com.

What happened at the end of season four was that half of the Eureka gang boarded the Astraeus spaceship while the rest monitored the launch. Things didn't go exactly as planned, as the ship and its crew vanished. As the series returns for the 14 episodes of the final fifth season, expect plenty of surprises.

"There are so many big, shocking turns, and the ramifications are so huge, that they will come back around in the end of the season. It's hard to divulge too much without ruining it. I don't want to spoil the surprise, but I can say that we do have some great guest stars returning and a couple of surprise faces who will pop up along the way," said Paglia.

Felicia Day as Dr. Holly Marten and Wil Wheaton as Dr. Parrish will return. As will Wallace Shawn as Dr. Warren Hughes.

"We've got some huge visual elements again, like we've done before. We get to tell a couple of stories that we've wanted to do for a long time. I got to write and direct for the first time, which I'd been unable to do mostly just 'cause the writing schedule is always so intense that to take the time out to be able to be up on set for the entire time prepping and shooting was always impossible. But I've had this pretty amazing team of writers and producers, and my cast and crew were unbelievably gracious and supportive," he said. Paglia directs the fifth episode, called "Jack of All Trades."

While he's thrilled about the end result of the final season, Paglia admits that the events surrounding the show's sudden cancellation were difficult. Eureka was initially picked up for a sixth season. 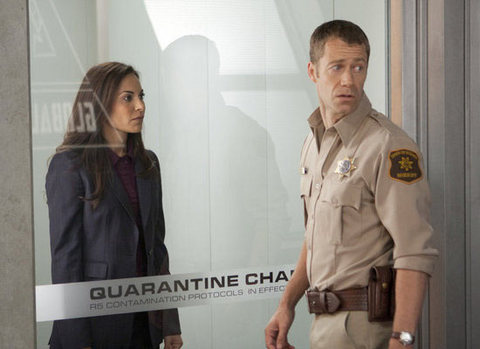 "We didn't get that news [that the show had been canceled] until we were in the middle of shooting the season finale. And at first, that was going to be it. It was an unfortunate circumstance to be in, but they told us that there was not going to be a season six and this was going to be the end. And I said, 'Well, it's impossible to course-correct right now and wrap this show up in this episode. It's already written as a massive cliffhanger.' It was setting up a whole new season of issues for these guys to have to deal with," he said.

"So I made an impassioned plea for them to add one more episode onto the schedule, which we were very fortunate that they did. But that left us in the position of having to break the story, which we usually have about two weeks to do, and then write the script, which is usually a couple of weeks for an outline and four weeks for a script. We had to break the story in two days, and I had to write it in three, because basically we got the news that we could have a last episode on a Tuesday morning. That meant that I walked into the office Wednesday morning to tell the crew that we got one more episode. I said, 'The good news is that we have an episode left and we can try to do a series finale. The bad news is production needs to start prepping it tomorrow.' So that's the situation that we're in. I feel very proud of the team that we built, because everybody really sort of said, 'Okay, these are impossible deadlines, but we're going to meet them.' So we all dug in," said Paglia.

"Everybody really stepped up, and I think what we ended up delivering is ultimately, more than anything, a love letter to our fans. It was a chance to just say, 'Okay, we're going to end this story' and acknowledge what has happened in terms of the abrupt cancellation. And yes, you'll probably notice more than a few digs at the network. Friendly jokes at their expense to acknowledge the massive outcry and sort of the way this whole thing played out. But even the network and the studio were unbelievably supportive during that time, because they didn't want to cancel the show either. And so they took the ribbing very good-heartedly. We tried to tie bows on a number of things that we probably would have taken at least another 13 episodes or 20 episodes to do. So it will feel maybe a little abrupt, but at the same time, we'd rather be able to get there than not. So I'm proud of what we got to do. I got to write a song for the finale with Bear McCreary, because he and I, one of the things that we were going to be able to do in season six was a musical episode. ... I never got to do the musical episode, so I got to write a song, at the very least. So there's a song in there for the finale. And I hope the fans feel some sense of closure."

As for Paglia, he's also working on trying to get some of that closure himself.

"It's been almost more interesting from the perspective of my kids. My daughter is going to turn 11 next week, and my son is going to be turning 8. They've never not known a time when Eureka existed. I sold this show in March of 2003. It's been a decade that it's been in my life. I'm going to definitely miss the characters, but mostly I miss the team that we have built. But luckily I'll be able to work with them again," he said.

While some of the crew have moved to Syfy's Alphas, others are joining him on his newest project, a possible Syfy series called Bob From Corporate.

But before Paglia goes moves on, there's one thing he wants Eureka's fans to know. "Please be sure to tell from me to all of our fans how grateful I am for the support over the years. This was my first foray into television, and to be able to have something like this last as long as it has with the kind of passionate support that they've shown us on the show, all of the actors and writers individually, it has just been really a career-changing experience. Something that I will always cherish. So my thanks to everyone for helping us get this far."

Eureka airs on Mondays at 9 p.m. beginning April 16. As for that big series finale, expect that to air this summer.

Here's the Eureka/Warehouse 13 crossover you asked for!
Need some comfort food? 10 sci-fi shows to binge and chill with during quarantine

What do you think? Should Eureka have been canceled? Or should it have gotten that sixth season?