We know that Avatar director James Cameron once had his own ideas for a
Spider-Man movie, but it comes as a bit of a surprise that the Oscar winner may be a part of the upcoming reboot movie.

Not about story points, though: about the technology they used to create Avatar's 3-D visual effects:

"Last [week] we met the director of [the next 'Spider-Man' film]," Cameron's producing partner Jon Landau revealed to us when he stopped by the MTV studio, explaining that the "Avatar" filmmaker and Spider-Man's new gatekeeper compared notes Wednesday evening. "[Webb] wants to do the next one in 3-D, which they've announced that they want to do. So, we want to try to support that as much as possible." 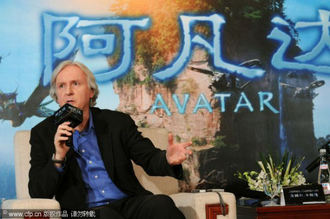 Although such an exchanging of professional pleasantries isn't typically noteworthy, this one is intriguing for two reasons. First, Cameron himself wrote a treatment for Spider-Man back in 1991, but after his brief flirtation with the webhead fizzled out, he insisted that any director following Sam Raimi's films would be getting his "sloppy seconds." Secondly, the recent revelation that the Spider-Man reboot will be in 3-D can be coupled with Landau's comments to indicate that Cameron is happy to advise Webb as he navigates the choppy waters of his blockbuster debut.

One of the surprises is that sci-fi techhead Cameron is a fan of Webb's snarky romantic comedy (500) Days of Summer. Who knew?

What do you think of an Avatar-influenced 3-D webslinger?