James Marsters: It was not easy being green in Dragonball Evolution

James Marsters, who stars as the evil Lord Piccolo in the upcoming fantasy film Dragonball Evolution, told SCI FI Wire that the movie was one of the toughest jobs of his career because of the extensive makeup, action and costumes. But he said the trouble was well worth it, as he'd been a fan of the Japanese manga/anime franchise and was eager to see it realized on the big screen.

In the film, Piccolo is the villain who's determined to gather seven mystical Dragon Balls and use them to rule the world. Out to stop him are the hero, Goku (Justin Chatwin), and his allies (Chow Yun-Fat, Jamie Chung, Emmy Rossum and Joon Park). Marsters (Buffy the Vampire Slayer) spoke about Dragonball Evolution in a recent exclusive telephone interview. Following are edited excerpts from that conversation. Dragonball Evolution opens on April 8.

Your son introduced you to the world of Dragon Ball a few years ago, right?

Marsters: He introduced me to Dragon Ball when he was 7. He's now 13. So I have seen about half of Dragon Ball, every single episode of Dragon Ball Z and then about two-thirds of Dragon Ball GT. So there's a whole Dragon Ball opus, and I've seen quite a bit of it. If you were to come over to my house, you''d see a lot of Dragon Ball DVDs all over the place.

This couldn't have been the easiest shoot, given all the action, your elaborate costume and your Piccolo makeup and prosthetics. How tough was it?

Marsters: Until I shot the role of Buzz Aldrin on a BBC film called Moonshot, it was the hardest shoot of my life. Moonshot ended up being harder. Dragonball was one of those shoots that was really tough, but I wanted it all. It was kind of like climbing a tall mountain. You don't expect it to be easy, and it isn't, and you're proud of yourself the whole time. I did a month of training in Los Angeles before we went to Durango, Mexico. Durango has a high elevation, about 1,700 feet, so we had to get used to that when we got there. I realized on the last day, when they were kicking me in the face for about an hour, that "Hey, this is the last shot. I'm doing it all." So that part was very fun. And, in fact, I went home with no injuries at all.

Dragonball Evolution has a pretty eclectic cast. How did you enjoy working with everyone?

Marsters: It was a good mixture of young, fresh, exciting talent and people with more experience. But as it happened on the set, we didn't really think of it that way. We were all just very into it. There was a lot of laughter, a lot of goofiness, a lot of jokes and just enough practical jokes. But the sage, wise people weren't teaching anyone anything. We were all just kind of having fun.

Are you signed for sequels?

Marsters: I am signed for three pictures. And I am signed very happily. I hope we make them all. My only fear is that they'll want to recast me. 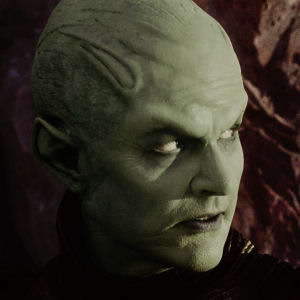 What would you want to see in the next Dragonball film?

Marsters: I'd like to follow the original story. We'd pick up seven years after this story. Goku is fully a man. He has a son who is 7 years old, named Gohan, and Piccolo has transformed himself into a younger figure who's trying to take over the Earth. While he's doing that, these three other Saiyans show up—Raditz is the prime one—and in battle they kill Goku. Like in a lot of these stories, dying is not the end, but Goku leaves his son as the only Saiyan on Earth that can protect the planet. And he has one year to train. This is the first scene I saw of Dragon Ball, when I watched the show with my 7-year-old son. So little Gohan searches out Piccolo, because I'm the only super-creature on Earth that can train him to save Earth in a year. So it's kind of complex. I'm not necessarily good. I'm after my own plan. But after I beat the hell out of Gohan, I agree to train him.

Some actors, after having played a character like Spike across several years and two television series, as you did on Buffy and Angel, would shy away from further genre fare. You seem to have embraced such work, playing Brainiac on Smallville and Piccolo in Dragonball and doing voice-overs for animated shows. Did you ever consider pursuing entirely different kinds of roles and projects after Buffy and Angel, or not?

Marsters: I have always wanted to do interesting projects. I have not really cut things up in any sort of genre. I just want to read stuff that doesn't bore me. Also, as a kid, one of my first intense cinematic experiences was seeing the first Planet of the Apes. The first one was actually terrifying on many levels, and it sent me straight to the bookstore, and I read the original novel. It was just fabulous, and it started me reading. So I'm not against watching shows or films with actors in lots of makeup doing things that humans don't normally do. I think it's cool.

Growing up, I was a Star Trek fan. So if something has good action, if there are ideas and something to chew on, then it should be filmed, and good actors should do it. And people are coming around to that. We've got Tobey Maguire as Spider-Man. Suddenly, Robert Downey is playing Iron Man and Edward Norton playing Hulk. People are realizing that these movies work because the writing is there, the characters are interesting, with a lot of meat on them, and the stories have something to say.