We've seen a lot of what-were-they-thinking sci-fi movie and TV tie-ins over the years—Jurassic Park salami, anyone?—but except for the occasional branded condom, they've never gone beyond PG-13.

But the Japanese distributor of Skyline has bucked that trend by releasing and giving away a Skyline-themed sex toy. Check out the image below of the first sci-fi Tenga. 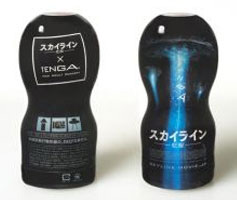 What's a Tenga? If you really want to know, we'll just let you go off and Google that one for yourself.

But what's the connection between an alien abduction movie and a sex toy? According to Dan Brown:

Tenga has collaborated with fashion brands and other companies to put out similar promo goods before, but this is the first time they've made them to push a film. Tenga is known for its "suction power," and there are scenes in Skyline where humans get sucked up by aliens, so that's the flimsy logic holding all this together.

We know we're supposed to sign off with something witty here, but for once, we're speechless.