Andrew Form, producer of Friday the 13th, told reporters that a sequel to the blockbuster 2009 franchise reboot may be his next film project, that it is eyeing a summer 2010 release and that it may place machete-wielding mass murderer Jason Voorhees in a new, heretofore not seen environment: snow.

"We're hopeful that's the next movie," Form said in a group interview on Thursday in Chicago. "There's a nice date coming up next summer that we hope everyone can see another Friday the 13th on." (Aug. 13, 2010, a Friday.)

The re-imaginging of the Friday the 13th horror franchise came out last Feb. 13, also a Friday, and earned $90 million worldwide during its theatrical run.

Brad Fuller, Form's producing partner, said that the duo were already developing the project with a screenwriter. "Yes, with Shannon Swift," he said. "For 2009 I think that it's [Nightmare on Elm Street] and the sequel to Friday the 13th, and then beyond that, I don't know. A lot of you guys have been talking to us for years, and you know we don't develop that far beyond what we're doing."

SCI FI Wire spoke to Form and Fuller about the future of Friday the 13th on the set of their Nightmare on Elm Street remake, directed by Samuel Bayer and starring Jackie Earle Haley. The following is an edited version of that interview.

Is it possible that we may see a Friday film in the snow?

Fuller: How did you hear that?

Well, you were talking about shooting maybe later this year.

Fuller: It's certainly been talked about. The financial ramifications of doing a movie in 3-D on a budget that size, because it's not like they're going to say to us, "Yeah, well, why don't you make a sequel, and here's twice as much money." It doesn't go that way. Our movies are virtually all the exact same budget, and I guarantee you if we make that movie, it'll be the same budget as the original. And we'll say, "Hey, do you want to do it in 3-D?" And they'll say, "Let's talk about it." And then when they see that it's six or seven million dollars more, they'll probably opt out unless something that we are not expecting happens. I suspect it will not be in 3-D, although we'd love to make a 3-D horror movie. We'd love to do it; they just don't throw that money our way.

My Bloody Valentine did very well in 3-D, and you have Final Destination and Avatar coming in 3-D.

Fuller: Here's the other problem. We don't have a release date. We don't have a green-lit movie. Let me be very clear, because last time we were talking about this movie it got back to [New Line production chief] Toby Emmerich that I said that this movie we're on right now was green-lit before it was, so let me be clear: Friday the 13th Part 2, we don't have a script. It's not green-lit, and we have no idea what's going to happen. If it gets green-lit, and we're able to mount it in a reasonable amount of time, we would hope the movie would open on Aug. 13, 2010. 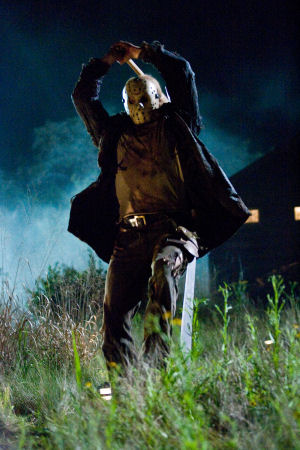 And it will take place in the snow.

Form: I don't know if we have the time to be ready for it. If it does all happen, it'll happen quickly, because the film does need to shoot before the winter does come and because the date would be summer next year. So we've talked about how much time to get ready for the 3-D and then how much post time you need, which is a lot longer than a non-3-D movie to get it into the theaters and then financially. But, I mean, from day one when we started talking about the sequel, we talked about it being in 3-D. ...

Acknowledging that there's no script and no green light for Friday, are you considering taking Jason more over the top in terms of kills, in terms of his physicality and what he does?

Fuller: If we're vulnerable on [the first film], it's that people thought our kills weren't clever enough, so whatever we need to do to make those kills seem clever in the second film is what we're going to do. I don't think that turning him into a space-going astronaut would be the direction that we're going to go [laughs]. ... That's a criticism that really goes to my heart, that I feel like I've failed the fans if those kills aren't original or that they're not unique or grisly. You can read the comments and see where the truth is, and you can see as a producer where maybe that kill could've been better or we could've done something more clever here. However we can bring more clever kills to the second one, that's what we're going to do. ...

Are you already talking to the cast members?

Fuller: We talk to them all the time. They're great friends of ours.

From your point of view, why did Friday the 13th open like that?

Fuller: We did love the movie. It felt like the movie came out at a time where there were a lot of very down horror movies and upsetting horror movies, and we had a great date, obviously, and the movie, it was a party. You know, we went to theaters. We watched it. It was a party in the theaters. Audiences were screaming at it and loving it. It was one of those fun horror experiences, and I think that for audience members who were looking for the same DNA as the original Friday the 13ths, they were very satisfied with that, and for people who were looking to pick us apart, and there are a couple of those—this will come as a shock to you, but there are—they were disappointed with it. But, at the end of the day, I think it's a really fun horror movie, and it's not so grisly that it becomes fetish-y and eliminates a good portion of the audience.

But were you surprised by it?

Is the new Nightmare's Freddy a pedophile? Or innocent?
Exclusive: Breaking down a key sequence with the filmmakers of A Quiet Place

Fuller: You can never expect that to happen. We can't imagine that we'll ever have an opening like that again. We've love to, but that's one for the record books.