Jim Caviezel on the toll he paid as The Prisoner

Jim Caviezel stars in AMC's miniseries The Prisoner, based on Patrick McGoohan's groundbreaking series from 1967, and there are many similarities: Number Six (Caviezel) still wakes up in the Village, where Number Two (Ian McKellen) still offers an idyllic existence as long as he doesn't try to escape.

But there are big differences. As Six tries to escape, he finds this Village is surrounded by desert, sea and mountains, making it even more inescapable than the Village that trapped McGoohan. And the look is more Lawrence of Arabia than quaint English (OK, Welsh) seaside town, as the miniseries was shot in and around Cape Town, South Africa, and in the Namibian desert. And though McKellen is English, did we mention that this Six is American?

The shoot took its toll on Caviezel, both physically and emotionally. "You know, my wife would come in the room, and she would sit there and she would watch me do my dialogue in my sleep," Caviezel said in a group interview Tuesday in Pasadena, Calif., part of the Television Critics Association's summer press tour. "My leg would be twitching, and I would think I was running through the desert."

Ever the pro, McKellan would leverage that stress, throwing Caviezel for a loop to elicit a reaction that would make a scene work better. 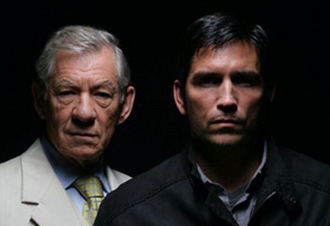 "In a scene, he could go one way and do the same thing and half split a line," Caviezel recalled. "In other words, give it just a whole different angle, which throws me. He does it so much that the scene continually has different colors to it. I wish I could get you in a room and let you see an evolution of a scene and see where it was going and how that affected me, where you just see my head twitch up or whatever and see the take before that, because he had never done that. They used that particular take and added just a whole other color to the scene. Then people go, 'Wow, look at Jim. Wasn't he great there when he did that head thing?' Well, I did it because I have someone that makes me better."

Caviezel took the show's themes of obedience to heart. Most Villagers accept the lives they've been provided and do not question the authorities. They are provided with homes and jobs and safety for their families. "A lot of people have that," he said. "They like it safe. But is it right? To this guy, it just isn't right. It isn't right."

The Village may tempt this Number Six too, but he is too rebellious to stay down. "In his core, there's something better than this," Caviezel said. "In his core, he knows that this town is trying to make everyone an automaton, and he's not. He can't be. He tries to fit in. He just can't do it."

The Prisoner premieres in November on AMC.