John Wick movies are a dog lover's dream, and as action heroes go, John Wick just might be the ultimate dog person.

Keanu Reeves' underworld assassin is a man of few words. But when it comes to dogs, his actions speak louder than anything he could ever say. Especially if you even think about hurting his four-legged pals.

John re-entered his secret society of professional mercenaries in 2014's John Wick when his new puppy, a beagle named Daisy, was infamously killed in a home invasion. Since that inciting incident, Wick has spent three movies avenging the loss of his best friend — and upending the lives of those either involved in hurting his puppy or those who would even think about injuring canines.

With SYFY's Memorial Day weekend marathon of the John Wick movies on the way, here's a look back at some of the franchise's most memorable moments (in order of release) featuring man's best friend and a dog's best friend: Baba Yaga himself.

Plus, we have a special video to share with you below: We had some very good dogs reenact key moments from the John Wick franchise. You're so welcome. 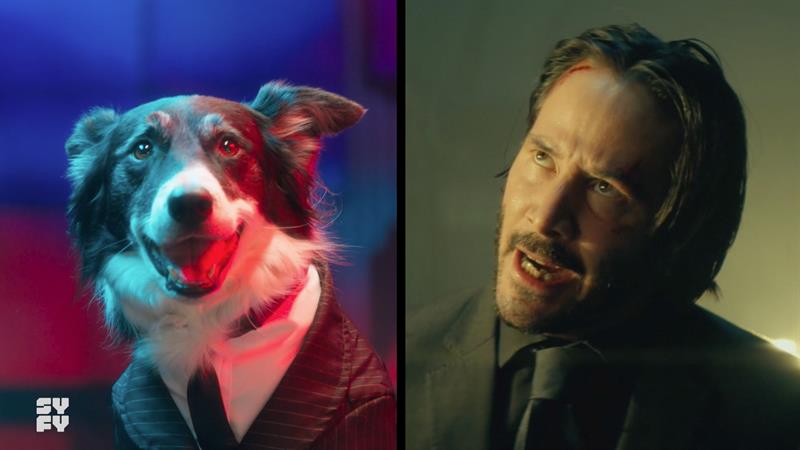 Now, on with the show!

The loss of John's dog in the first film is too painful to watch, and it would hurt even more to revisit in detail here. Losing the gift John received (posthumously) from his late wife sparked the super-assassin's journey back into the world of gold coins and guns. It also set him on the path to find another animal to care for, one that needed him as much as he needed it.

In the final moments of John Wick, a badly injured John stumbles into a veterinary hospital to tend to his wounds. There, he finds several dogs in cages waiting to be put asleep. Even with a small army of shadowy killers on his tail, John stops to help one of these dogs: a pitbull. Like his new, nameless best friend, John, too, is in need of someone to take care of him. Sure, the symbolism here is not subtle at all, but attention must be paid to the fact that an action film like this eases off the trigger to give its story a genuinely earned dramatic beat. John lost one of the best dogs in movie history in order to find another one, and himself.

John Wick: Chapter 3 - Parabellum opens with John on the run from the High Table and on his way to excommunicado status for killing someone on Continental grounds — a big no-no in John's world. While pulling a Fugitive on the rain-slicked streets of NYC, en route to the New York Public Library, John gets out of the rain and into a cab with his pitbull. The movie would raise a few logic questions (and risk losing momentum) if the dog is with John for every action scene, so that's the logistical reason for why John offers the cabbie a coin marker in exchange for the dog's safe passage to the Continental.

However, for John as a character, sending his canine away is our anti-hero's way of keeping his pooch safe from the unrelenting, action-packed set pieces that are about to consume most of Parabellum's run time. We defy you not to feel a tug on your heartstrings when John pets his pup goodbye and calls him a "good dog."

The trailer for John Wick: Chapter 3 promised us Halle Berry's Sofia and her highly-trained canine pals teaming up with John for a battle royale and it did not disappoint.

Three movies in, and the bad guys still haven't caught on to the fact that you just don't mess with any of John's four-legged friends. John and Sofia teach them the error of their ways in a bullet-filled escape from a fortress in Casablanca. At this point, fans have seen every way John can use a gun to ruin some vaguely-European baddie's existence, so the filmmakers spice things up by throwing in Sofia's pair of enemy-seeking Belgian Malinois. In an interview with the ReelBlend podcast at the time of Chapter 3's release, director Chad Stahelski revealed the time-intensive prep required to train these dogs for their big screen debut:

"You have to have all [the training] incorporated into the financials — what you're going to do with the animals after [the movie], and how you train them — because you don't want the animals to hurt their teeth, hurt their jaws. The stuntmen have to be exceptionally trained, because if they're going to do these gigantic air-out reactions, you don't want your stunt guys to injure the animals. You want them landing on the poor doggy or anything like this. So the skills have to be rehearsed and rehearsed and rehearsed."

That rehearsal period lasted several months, with trainers working with the dogs to get comfortable around them. Also, Berry and Reeves were required to associate with the dogs throughout pre-production and shooting so the animals could get used to interacting with their human co-stars and not confuse them for their fictional bad guy targets. However, actors and stuntmen weren't the only key members of the production involved in the action scene's necessary planning.

"Who else is on set when you're doing that? All the background players," Stahelski explained to ReelBlend. "Guess who's even closer to the dogs than the stuntmen? Cameramen. So who does a dog have to know the most? Camera guys. Most of the time, cameramen are only brought on maybe a week, maybe two weeks before the entire movie starts. I have to bring my team on three months before they start, just to stand there and let the dogs get used to the smell."

All of that prep pays off in one of the franchise's most crowd-pleasing stunts. When John's not dispensing headshots like Oprah gives away cars, the two dogs are chewing up or biting down on the poor dudes who get in Sofia and John's way. Audiences can't help but clap and cheer as man's best friend become the franchise's official mascot, especially when Sofia orders one to hold a human Milk Bone in its jaws until John can deliver one hell of a fatality.

SYFY's John Wick Memorial Day weekend marathon kicks off Saturday, May 29 at 9 p.m. ET on SYFY with the original, John Wick. The marathon picks up on Sunday, May 30 with the full trilogy, starting at 4:30 p.m. ET, including the SYFY network premiere of John Wick: Chapter 3 – Parabellum. And just to round(house) out your long weekend, there'll be follow-up airings of the second and third installments on Monday, May 31, at 3:30 p.m. ET and 6:03 p.m. ET, respectively.