John Barrowman on Torchwood nudity: 'I'm proud of my bits and bobs'

John Barrowman is about to get exposed in more ways than one as Torchwood travels into uncharted territory, said the actor who plays Captain Jack Harkness. With the premiere of Torchwood: Miracle Day on Starz tonight, you can expect the transplanted series to go to some of the same places that Spartacus and Camelot went before it.

This is part two of a two-part interview with John Barrowman. Click here to read part one.

"Here we are with this network that does edgy programming, that does programming about characters and people who are like people who actually live in the real world," said Barrowman in an exclusive interview. "We're in a good place [at Starz]. We're in a home that will keep Torchwood true to what it is, and also allow us to do really edgy things that will keep it exciting and watchable by our solid audience, but also for our new audience. So I'm chuffed [aka 'happy'] that we're there."

Of course, our mind goes into the gutter instantly. Does that mean we'll get to go "places" where only cable can go?

"We certainly do. And I'll tell ya, we go there!" said Barrowman with more than a little relish. "Oh, we do! Those days of filming, I loved them! I loved every minute of it."

While many actors might have difficulty with nudity, Barrowman is not one of them.

"Hell no! You know what? We're all different shapes and sizes, and God gave us different bits and bobs, and I'm proud of my shape, my size, and I'm proud of my bits and bobs," he said. "It's not gratuitous, what we do in Torchwood. It actually is part of the catalyst for the story. And Russell's [creator Russell T Davies] always said this, because he's said it's very difficult to write sex scenes and nudity now, because immediately you're looked at like you're doing them just to be sensational, and they're not just for television anymore because they end up on the Web and all over the place. So he really thinks hard about when he puts this stuff in, and it's part of the story as opposed to 'Let's just get John Barrowman to get his kit off.' Because I'll do that by the swimming pool if I'm asked to."

And speaking of sexual situations, Barrowman admits that Jack will indeed have a love interest. "He might have more than one," he said with a laugh.

Whether Jack's love interest or interests are male or female or alien remains to be seen, since the character is omnisexual. We do know that Jack's had relationships with women, one of which resulted in a daughter and a grandson. And "we know he's had relationships with men, with Ianto and others. The thing that Russell has said, 'Jack's gayer than he's ever been.' So the new audience that comes in won't really know about his past relationships. They'll just see what's here. But that's not to say [Jack is gay] ... because Jack is omnisexual. In fact, Russell says he's bisexual. He's a bisexual hero. And he said it's wonderful to have that kind of character played by an openly gay man on television. So I'm thrilled by it, and I'm excited that I get to do all of the things that I'm allowed to do on television and on Starz," said Barrowman. 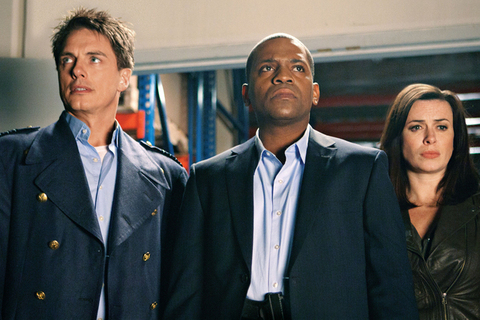 "The thing is, most heroes on any sci-fi show, they're bigger than life. And they do things that we all would love to be able to do and think we can do, whether that's hit on somebody and then passionately make out with them, or shoot somebody to get them out of the way because they're standing in the way of saving mankind. So it's great that Jack gets to do those things; it's great to have a character that is allowed to do those things, and it's great to play those things," he said.

According to Barrowman, playing Jack "is like putting on a pair of comfortable shoes, or buying a pair of shoes and really wanting to wear them. He's somebody that I really enjoy playing. With no pun intended, there's a lot of John in Jack and a lot of Jack in John. So I've got a lot of my own personality that I put into Jack, because for people who know me and know me on set, I'm a little naughty.

"I have an edgy sense of humor, I speak my mind, and I have an opinion. And Jack's a lot of that, and that's again a sign of really good writing for them to pick up on your own personal traits and to put them into a character and then work on them a little bit, and make you do things and make decisions and say things that are true to who you are but also slightly different than what you would say or how you would react to something. So I guess that's where the challenge is. Having the personality of John that is part of Jack, but then augmenting it to make it something exciting and heroic," he said.

Barrowman, who was born in Scotland but raised in the U.S., is a singer, star of musical theater and, as his website states, "an Entertainer with a capital E." While he's had a distinguished career on stage and screen so far, it's Captain Jack that he's most known for.

"I'm sure there's other characters I will play. Like for instance, having gone off to Desperate Housewives to do that. I did a guest-starring role on Hotel Babylon in the U.K. So there are other things out there. But I say this ... in my drama persona and my drama role—if I'm only to play Captain Jack and I'm still allowed to do my other theater stuff, my musical, my recordings, my writing, if I'm still allowed to do that—I am happy to play Captain Jack for as long as they want me to play him. Because I absolutely love him. To go off and do another character would be fun. It'd be a thrill. It'd be great. But if I'm asked to play a hero for the rest of my television career, I'm content. That's the best job in the world," said Barrowman. 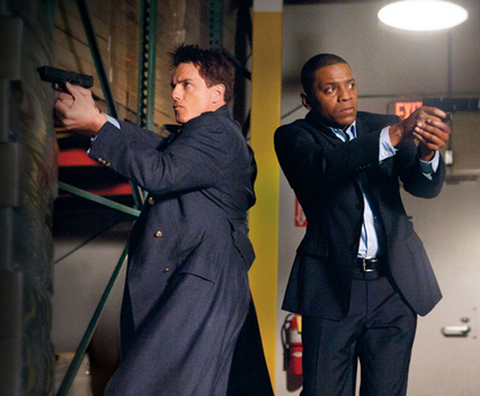 Barrowman's love affair with Captain Jack has led to an unexpected journey for him and for Torchwood. "If you think about how we were when we started out, we were a small show on a small digital channel in the U.K., and we had really good ratings. And then we moved to a bigger channel, BBC 2, and we proved ourselves on there, and the show evolved even more. Then we moved to BBC 1 and we changed again to another type of format, and also the stories got better and more intense, and we expanded," he said.

Torchwood: Miracle Day is produced by BBC Worldwide Productions for STARZ, BBC Cymru Wales and BBC Worldwide, which is one of the reasons it's got an international flavor this season.

"We're continually morphing and changing. And this one, again, it seemed the right progression for us to become international instead of just being based in one place. Because as Russell has said, if we stuck to the Hub all the time, we wouldn't be able to branch out and go international. So this is us being on the move. And this is a quote from Russell, he said, 'This is the best thing that ever happened with blowing up the Hub.' Because it opened us up to a bigger spectrum." The Hub was the headquarters for Torchwood until it and Jack were blown up in Children of Earth. Of course, Captain Jack, who is immortal, didn't let a little thing like getting blown to bits get in the way of saving the Earth's children. Other characters, like Jack's grandson and Ianto, were not so lucky.

That said, expect a body count during the 10-episode event that is Torchwood: Miracle Day, despite the fact that in the beginning no one can die. No one is safe.

"We're a drama, and dramas have to change. We always said in dialogue, 'In Torchwood people die young.' And as stories progress, we realized we had to do things to change and to keep our audience spiced and also keep their emotions going, whether they're angry with us or they're following right along down that river in the boat with us, that still gives us a good audience. Because no matter what, they'll come back. They'll come back to see what's going on and what's happening with the characters that they love," said Barrowman.

Here's a behind-the-scenes look at the making of Torchwood: Miracle Day:

Check out part one of this interview by clicking here.

Will you tune in to to see John Barrowman's "bits and bobs"?