John Barrowman: Why you'll be happy to pay $$$ to watch Torchwood

This is part one of a two-part interview with John Barrowman. Part two will run tomorrow. John Barrowman thinks you should prepare yourself for a bumpy Torchwood ride. When Torchwood: Miracle Day premieres Friday on Starz, he promises if you watch you'll join his character, Captain Jack Harkness, on a shocking, jaw-dropping roller-coaster ride of non-death and destruction.

Torchwood: Children of Earth was the third, short, five-episode season that aired over five days on BBC and BBC America. It's been two years since that stunning, gut-wrenching season, in which Captain Jack sacrificed his own grandson to save the Earth's children, and where his lover, Ianto Jones, died a heartbreaking death. Now, with season four, Torchwood: Miracle Day, we'll get 10 episodes aired weekly on the pay cable channel Starz. And yes, if you don't already have Starz and you want to watch the new season of Torchwood, you'll have to pay up.

In Torchwood: Miracle Day, Captain Jack is back from space. "He is trying to keep the Torchwood name below the radar in order to protect Gwen Cooper, who is in hiding with her family. He's doing that because he's realized in the past that Torchwood has done some bad things, and that it's caused a lot of death and a lot of destruction to a lot of people. So Jack is taking that responsibility on, and he's dealing with that, and he's keeping it under the radar," said Barrowman.

However, one day worldwide everybody "wakes up at a specific point in time and they're immortal. Everybody. No one can die. Now, it sounds like a wonderful thing, but there's also some really terrible things that come along with it, because what if at that moment you're in a massive car accident and you're decapitated? You're still going to be alive. We have a lot of people who are sick. We have a lot of people that will need medication. We have people who need pensions. It creates a huge, huge amount of problems. Now, this all starts to snowball, and events happen and other little things happen, and Torchwood can't be kept under wraps," he said.

Jack, of course, must leap into action to save Gwen, and along the way we meet a new character named Rex Matheson, a CIA agent who's played by Mekhi Phifer (Lie To Me). Also along for the ride are Alexa Havins, who plays a computer whiz named Esther Drummond. 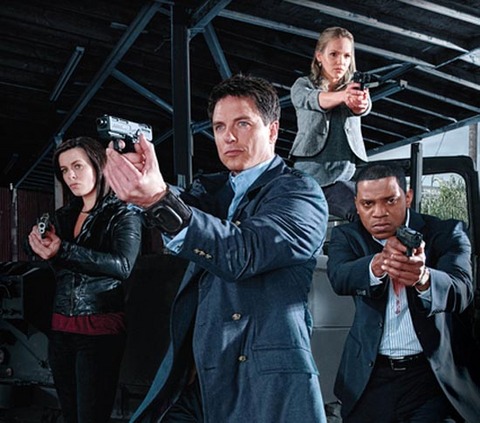 "I can't tell you too much about it, but within that storyline, what happens on episode one will be answered in episode 10," says Barrowman. "So you won't have to wait six seasons to find out what the answer is. But within those 10 episodes, other things happen in true Russell [T Davies] fashion, in true sci-fi fashion. Other things happen in little mini-stories that get resolved or explode and get out of control. It's going to be a huge roller coaster."

One of the most shocking characters we meet is a child murderer named Oswald Danes, played by Bill Pullman (Independence Day). "He's laying in a bed being injected to be put to death, and when this event happens, he doesn't die. So you've got a man who is a pedophile who is being put to death, doesn't die, and all of a sudden you're faced with this character, and I just say this to you ... You're going to like him. And you're going to be really angry at yourself for liking him, because it's such an interesting dynamic to add to the storyline. And his storyline goes off on a tangent," he says.

That tangent includes Lauren Ambrose (Six Feet Under), who plays Jilly Kitzinger, an evil PR woman on a mission. "So there's all these different people. We've got a great cast. It's massive ... it's spectacular. This is an amazing series that you're about to see. So you will be happy spending the money that you have to when you get Starz."

Beyond the excitement of a new Torchwood story, according to Barrowman, we'll get plenty of the series we've come to know and love. Including lots more Captain Jack.

As Torchwood fans already know, Jack just happens to know a little something about immortality, since he can't die. Running into a world filled with immortality creates an interesting dynamic for the former Time Agent.

"That's right. He's a step ahead of everybody else. All those aspects of that, how he deals with it and deals with what's happening on the planet ..." said Barrowman, his thought coming to a screeching halt. "Part of me wants to go 'blah!' and say it, but I can't. I just can't."

However, he is more than happy to talk about his well-known omnisexual character in more general terms. "Jack, in particular, he is still the hero. He's got a dark side to him, but the one thing that the audience will delve into more is his past. We learn a lot more about his past and what has happened in order to get him to this point. I'm being very vague because I don't want to give stuff away, but the history of it all, the history of Jack, was a thrill for me to go back and play, because I was learning new things about him, and I was shocked by things and also surprised by things," he said. 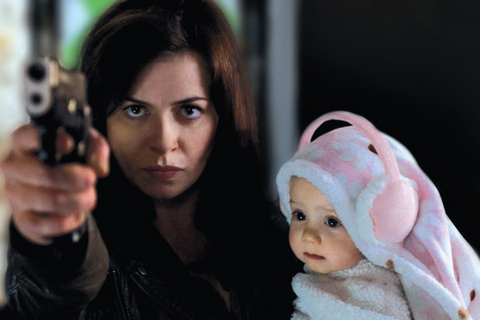 As for Gwen, played by Eve Myles, "it's interesting to see how Gwen's decision-making completely changes because of her situation. And she's on a journey too. Gwen and Jack go through a process where they really ... I say this, and I'll be vague, but you can decide whatever you want. They really get to know each other in this episode, in this series. And they learn to understand each other completely, which solidifies their relationship. And that process is an amazing one to watch, and so much fun to play," added Barrowman.

"Growing up having watched sci-fi all my life and being a fan geek myself, I love the fact that I'm one of those heroes that I used to watch as a little boy, who does all those big things. ... And here I am as a man, a grown man, playing that, and other people are watching it. It's just a thrilling thought for me," he said.

"I'm living a life that I only dreamt about, and I'm living it in a way that I used to look at other people and think, 'My God, wouldn't that be wonderful.' And because of Captain Jack I'm living like that. So I'm truly grateful, truly thankful, and that's one of the great things that Jack has done for me that I'm surprised by."

Here's a special look at the characters of Torchwood: Miracle Day:

Check out part two of this interview tomorrow.

Will you fork over the cash to watch Torchwood: Miracle Day?