John Ratzenberger told SCI FI Wire that he's thrilled to be Pixar's go-to guy and good luck charm; the former Cheers co-star has provided a voice for every Pixar animated film from Toy Story to the upcoming 3-D animated Up.

"They say, 'Oh, we've got such-and-such film coming up. We haven't figured out your part yet, but we'll let you know,'" Ratzenberger said. "I just say, 'OK.'"

The most tearjerking scenes in Pixar history, ranked by how much they make us cry
6 reasons it took 11 years for you to see Toy Story 3

SCI FI Wire spoke to Ratzenberger by telephone last week, in part to discuss Up, which opens nationwide on May 29, but also as part of Disney/Pixar's promotional push on behalf of A Bug's Life, which made its Blu-ray debut on Wednesday. Ratzenberger provided the voice of P.T. Flea in the acclaimed film, which was originally released in 1988 1998. Following are edited excerpts from our exclusive interview with Ratzenberger.

Let's start with A Bug's Life. How fondly do you look back on that as a film and as an experience?

Ratzenberger: Well, P.T. Flea is my favorite character, of all the characters that I've done. P.T. Flea was just so unpredictable and nuts, and in real life I always get a kick out of those kinds of character, people who just go into a rage for [no] explicable reason. He was always on edge. His blood pressure was always way over the top, and everything that he did was done in a panicked state. So it was a lot of fun to play him.

The Blu-ray edition of A Bug's Life should be great to look at ...

Ratzenberger: For the people that are interested in such things, [co-director] John Lasseter said that if you watch it in Blu-ray you'll see it as they see it at Pixar. It won't lose anything in the generations, so you'll see it the same way the animators see it, right in the kitchen there.

You're back now in the latest Pixar film, Up. What interested you about Foreman Tom as a character?

Ratzenberger: I actually did that in real life years ago. I wasn't a foreman, but I was a house framer. So I'm no stranger to hardhats and lunchboxes. 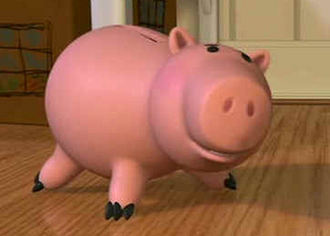 Some people consider Up a daring project for Pixar, since it's focused on a human [Edward Asner], and he's nearly 80 years old, plus it's very different styles of animation and even comedy. Your thoughts?

Ratzenberger: I don't see it as a risk, because I saw the film last week and ... bring Kleenex. You're going to be teary-eyed in the first five minutes. What they've done is they've gone back to the original Disney method of making films from the heart. It doesn't make any difference how old you are; if a film is from the heart, then it's going to touch the heart of the audience. It sure worked for me, anyway, and the people I was with. I think they have another winner.

Toy Story 3 is next, and you're back as Hamm. What have you done for that so far?

Ratzenberger: I have been in three or four times already [to record dialogue]. To be an iconic piggy bank, what a thrill. I've got more action figures, I've been told, than anyone else in Hollywood because of all my Pixar adventures, and the one they did of me [as Major Derlin] from The Empire Strikes Back. The story, ... I can't tell you the story, but they've done it again with the story for Toy Story 3.

What else are you working on at the moment?

Ratzenberger: I've been doing a lot of traveling on behalf of my foundation, Nuts, Bolts and Thingamajigs. We're trying to get vocational training back in schools, and we're starting to pull together some legislation that state representatives can use to get their states to teach kids how to use their hands again. Everything we do every day, everything we are as a culture, it all starts and is all based on someone's ability to put a nut and a bolt together.

We're running out of those people, because we haven't been showing children how to build things, maintain things. So what I'm about now is being a Paul Revere and warning people that if we don't move now, then in six to 10 years we're going to hit an industrial tsunami because we're going to have no electricians, carpenters, welders and people like that.