Jordan Ladd isn't a mother, but she plays one in the movies, and when she was initially approached to play the main character in Grace—Paul Solet's tale of a disturbing bond between one mother and her child—that wasn't what daunted her. She was just worried about getting pigeonholed as a scream queen.

"When I first got the script, it was pitched to me as sort of a Rosemary's Baby kind of thing, and I thought, 'I'm trying to get out of genre [material],'" she said in a group interview Monday in Los Angeles.

"My manager said, 'No, this is really special. Before you pass, take a look,'" Ladd recalled. "And from page one, I found the character of Madeline Matheson riveting, and I kind of got it. But as I proceeded to read, there were beats that were more horror-like."

Ladd, who previously worked with Quentin Tarantino in Grindhouse, is a bit of Hollywood royalty: Her grandfather was Alan Ladd (Shane, The Great Gatsby), her mother is Cheryl Ladd (Charlie's Angels) and her father producer David Ladd (The Mod Squad).

In Grace, Ladd plays a young woman whose stillborn child returns to life with a horrifying appetite. She soon discovers that her baby—now named Grace—thirsts for something more than mother's milk, and Madeline is determined to feed her, no matter the consequences. 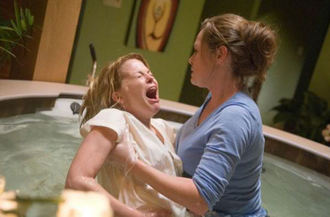 Ladd said that she was intrigued to see whether Solet could truly realize the material's potential. "I wondered what kind of filmmaker Paul was going to be, and my decision really hinged on was he telling a story of selflessness and of motherhood going wrong, and that kind of being the present theme, or was he using this as an opportunity to sell beats?" she said.

But Ladd said that their initial meeting stretched into a real bonding session, both personally and professionally. "We sat down with our two dogs, and we were only going to meet for a few minutes, and we talked and talked for four hours, and we just kept going and going," Ladd said. "After that meeting, I just sort of looked at him and said, 'F--k it, let's do it. ... I'm so excited,' and it was clear to me that he was really using genre as a way to tell a really profound story about women and childbirth and sacrifices and love. So it became really clear to me that was the movie he was making and not a genre movie. It was manna from heaven getting this role."

Although the two of them agreed on the way in which the material should be approached, Ladd said that a lot of their collaboration had to be done on the fly—and on the cheap—since the film's budget would be modest at best. "We didn't have any rehearsal time together [because] he had to get on a plane and do preproduction," she explained. "So our rehearsals were over the phone or via e-mail or pages—pages that we may or may not shoot or ideas or whatever. So it was constantly percolating in my mind at all times, and we were both calling each other [saying], 'Dude, I'm sleeping with a pen and paper next to my bed, and I've never done this. I'm dreaming about it, getting up and scribbling backstory here.' And he was like, 'I'm doing the same thing.'"

The constraints put on their time actually strengthened her performance once shooting got underway, Ladd said. "We only had a limited amount of days, so that was a real blessing, because I had done all of the character work with him prior to it in this really engaging way, and no writer has ever allowed me into the process. So much of my preparation was that."