We're huge fans of Josh Brolin, but this is not good news: The Los Angeles Times reports that Brolin (Jonah Hex) may be in line to replace Tommy Lee Jones in a contemplated third Men in Black movie.

Silly as the movies are, they work well mainly because of the chemistry between the antic Will Smith (who's slated to return) and the dour Jones, who's a lot funnier than he lets on. We're not sure how Brolin would fit in and in any case would hate to see Jones go.

Here's what the Times said:

[Brolin] is being considered for a role that would have him donning the black suit and shades for the third installment of the sci-fi comedy franchise. His exact part is a matter of discussion, but in recent days there's been chatter in Hollywood development circles of a few possibilities: He could play a new single-monikered government agent, with Tommy Lee Jones' Agent K passing the baton to Brolin's character. Or he could play Agent K as a young man. Or something else entirely. 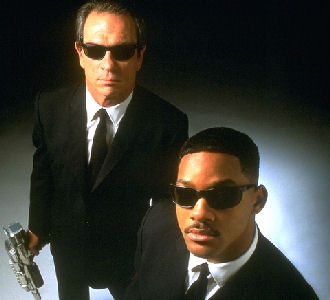 Sony is currently eyeing a production start for the picture in 2010, though it doesn't have a green light, the newspaper reports.

We'd be on board if Brolin joins Smith and Jones, but not if he replaces one of 'em. What do you think?