Seasoned adventurer Josh Gates believes his latest set of Destination Truth investigations will scare, terrify and thrill you, and he wants to take you along for the ride. The series begins its fifth season tonight with a two-hour premiere on Syfy at 8 p.m.

"Every week we are going to pick up on the trail of some mystery around the world and we're going to invite the viewer to come with us to get on a plane, to fly around the world and to investigate that mystery," said Gates, who hosts Destination Truth. "The great thing about the show is that we make that a real open invitation. We want the viewer to feel like they're right there with us. And so the way that we film Destination Truth is we just kind of include it all."

This season, Gates and his Team Truth will travel the world from the jungles of Vietnam to the haunted Mayan ruins of Tikal in their search to find the spookiest, most terrifying creatures and paranormal activity on earth. There will also be a return visit to Romania's haunted Hoia Bachu Forest, where one of their most shocking past investigations took place.

"This season we're doing our first ever follow-up investigation," said Gates. "People always want us to go back to the Island of the Dolls in Mexico or to Chernobylâwhich I'm not going to go back toâor to this haunted forest in Romania. And I think the reason that people were so interested in that story the first time is that my cameraman Evan had this really terrifying experience there.

"This is a guy who ... he's a real road warrior. He's worked on all sorts of different types of shows. He's not a paranormal guy. He doesn't believe in ghosts. He's a skeptic. And we went into this forest that's reputed to be home to this dark, paranormal energy, and he was basically blown off his feet by something a couple of years ago on the show," he said.

Evan Stone, who has been working on other projects of late, agreed to return to Destination Truth for the investigation. "He was a great sport. And I, of course, made him go back to the very same place that he was the last time, and it's a pretty thrilling night. Another set of really mysterious things happened to him," said Gates. 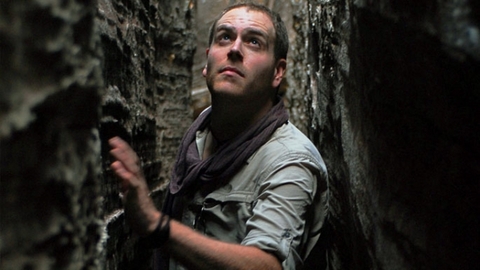 The investigation into a Bigfoot-type creature in Vietnam also proved fascinating, said Gates.

"We found some incredible evidence. I brought that evidence to really the foremost expert in the world for footprint castings, and got some pretty amazing validation of that evidence."

However, what makes it most interesting is that "there are no big primates there. It's very difficult to begin to explain away what some of these people have been seeing. And there have been very interesting pieces of evidence brought forth over the years in terms of footprint casts that have been recovered from different parts of Vietnam, that also point to the fact that there may be something unidentified there," he said.

"But for me the most impressive thing about the story in Vietnam is just how much of Vietnam, for not being an enormous country, just how much of it is difficult to explore and has never really been cataloged. You know, there's the largest cave in the world, which was found just a couple of years ago, in Vietnam. I mean, you could slide the Statue of Liberty inside the mouth of this thing. It was just discovered ... a few years ago. And a new species, a new mammal was discovered in Vietnam within the last 10 years, which is something that doesn't happen very often," he added.

"So this is a country that really hasn't been explored. And so that's when it gets interesting, is when you've got a place that people haven't really charted and you've got a lot of folks coming forward saying, 'There's something here that we can't identify.' That's what made it compelling for me."

The seven episodes of Destination Truth's fifth season offer plenty of adventure, and he admits he often found his own beliefs challenged.

"We have a great episode in Fiji this year where we look after the story of some sort of sea creature which terrorized a group of villagers in a very remote part of Fiji. I certainly left there feeling as though these folks saw something. Was it a monster? Was it a shark?" asks Gates. "Certainly it could have been something that we could explain away as something that's a cataloged creature in the ocean. But I left there feeling like these folks had a real experience."

There are also "a number of really compelling paranormal investigations this year. And I'm always on the fence about the paranormal. I'm a real open-minded skeptic when it comes to the ghost world. And there are places that I've traveled to where it's very scary and I end up feeling like there might be something going on there," said Gates. 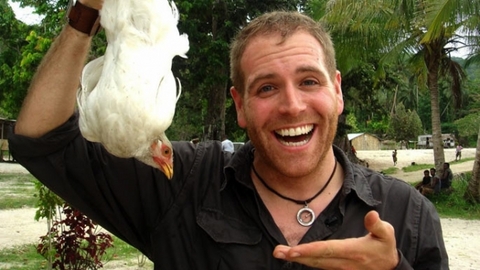 "We do a really unique paranormal investigation this year in the Philippines at a place called Hanging Coffins. These are coffins that are bolted to the sides of cliffs. It's probably the most unique and harrowing-looking graveyard in the world. And so we did an investigation in this hanging graveyard. And it was a terrifying place where some weird things happen to us," he said.

"And we also do a UFO episode this year in Kazakhstan, which is a location we've never been to before. I am really not a believer that there are UFOs observing us here on Earth, and yet I saw something that blew my mind, something I could not explain. And so that's in the show as well. That's the great thing about working on this series, is that I'm constantly going into situations and having my beliefs turned upside down."

And while other shows have tried to mimic Destination Truth, he feels the show is set apart because the "real adventure" join the "misadventures. ... If there's flat tires or bad food or rough lodging or zany people that we meet, we throw them up all on screen so that the viewer doesn't feel like they're watching a kind of sanitized, produced effort. We want them to feel like they're out there with us and show them what it's really like to have this adventure. So it's a really inclusive show that way, and it's a lot of fun."

The show doesn't take itself too seriously, said Gates. "We always think it's just a great ride."

Destination Truth premieres tonight on Syfy at 8 p.m., and then beginning next week airs on Tuesdays at 9 p.m.