Dwayne Johnson, who stars in the upcoming Disney fantasy film Race to Witch Mountain, told reporters that he did his taxi-driver character's stunt work and cab driving himself. "I actually did all of the stunt work, which was great for me," Johnson said. "I had a lot of fun—it reminded me just how fun and cool movies are."

Johnson, who reunites with director Andy Fickman after last year's The Game Plan, said that the film was a learning process for both of them. "I had never shot action sequences like that," Johnson confessed. "Scott Rogers, who was the action coordinator for the Bourne movies, came on board, and he did these really great action sequences, and much to Andy Fickman's chagrin, I was able to do all of the car stunts. Second unit shot them, that's how he didn't know that I was in the car. He would have said no, but I would not have listened, like I normally don't when he gives me direction."

In the movie, Dwayne Johnson plays Jack Bruno, a hard-luck taxi driver in Las Vegas. His life is thrown into chaos when two teens—Sara (AnnaSophia Robb) and Seth (Alexander Ludwig)—jump into his cab, on the run from something. It's not long before Bruno realizes the children possess extraordinary powers and that they are being pursued by something extremely dangerous. (Race to Witch Mountain opens March 13.)

Johnson spoke in a news conference in Westlake Village, Calif., on Wednesday to promote the movie, a reimagining of the 1970s sci-fi family movie Escape to Witch Mountain and its sequel, Return to Witch Mountain. The following is an edited version of that interview. (Possible spoilers ahead!)

Dwayne, how did they come to you with the idea for this remake? Did you know the original film already?

When you discussed the film on the set, you mentioned that there was some uncertainty whether the film would be PG or PG-13. How did you arrive at the film's final PG rating?

Johnson: Andy wanted to infuse a lot of action with the comedy and certainly with the fantasy element. He didn't shoot it in a way that was ever restraining for us in any way. He shot it with all of the action, all of the special effects, as if it were going to be a strong PG-13, and then if we were going to dial it back in the editing, then he did. It just so happens that we made the best version of that movie in a PG setting that we could, and we pushed the envelope quite a bit. For example, the final fight scene with me and the Syphon [an alien bounty hunter], it was a very long, intricate fight scene that has a lot happening in it. That was pared down considerably, and I'm sure in the DVD version you'll see the fight in its entirety. 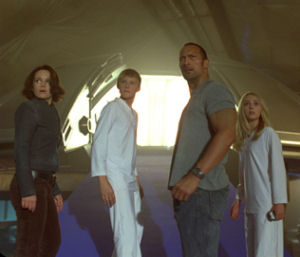 Even though you worked with Andy on The Game Plan, most of that work was dramatic. Did you sort of indoctrinate him in the world of action movies on this?

Johnson: I did. I indoctrinated him by making him watch old Clint Eastwood movies, and then I would openly punch him in the mouth. He's a wonderfully warm, happy guy who's constantly joking, but there's a streak in Andy that's great; he really enjoys action movies, and he's pretty hardcore that way. So he was really excited to jump into this and sink his teeth into something that had a lot of action in it.

The movie seems open-ended for a sequel. Are you interested in that if there's an opportunity?

Johnson: Am I open to that? Sure. I think success breeds that type of opportunity, and if audiences respond the way we hope that they do, I'm sure we'll be talking about a sequel. The intended ending was to make sure that Jack completed the mission and do what he set out to do. That was the intended ending, and then as we're shooting and the characters get established, then we start thinking, what else can we shoot? What else would be interesting and entertaining? But the goal was to end it where we ended it.

What is it about the original that makes it ripe for a remake or reinvention? Or is it a case where it was a good idea that wasn't executed in the best possible way?

Johnson: I thought that they made the best movie in the '70s that they could have made back then. They created a classic in terms of the story, and it's a little tricky, especially when you're dealing with movies that are classic and you try and reimagine or remake them. In Disney's case, because they're so very brand-specific, it's a little tricky, and you really want to be careful. I, along with Disney, loved Andy's take on the movie, so I thought that he wanted to take a great idea and just make it bigger. How can we not only make it bigger, but how can we serve it up to the audience today in a way that would leave them thoroughly entertained? There was a good challenge of making it the biggest adventure you possibly could and inject humor where you possibly could that wouldn't stifle the story from progressing.