Kevin Grevioux reveals the secrets of I, Frankenstein 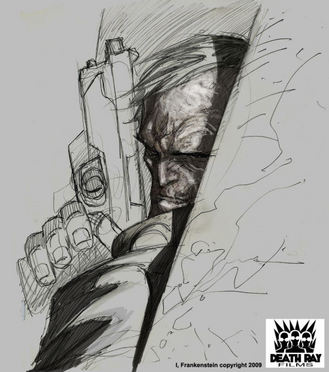 Concept art for I, Frankenstein (click for larger image)

Kevin Grevioux, the creator of the upcoming comic book and live-action monster movie I, Frankenstein, told SCI FI Wire that he looked at his own previous work for a successful model for re-imagining classic fantasy creatures for the new film.

The best, worst and weirdest adaptations of Frankenstein
For V-Day: 14 scenes of hearts being ripped out ... LITERALLY

"I'm going to have to say Underworld, because it took vampires and werewolves and modernized them," Grevioux said in an exclusive interview Monday. "It eschewed all the mysticism and came up with something different than had ever been done before."

I, Frankenstein combines the stories of Frankenstein's monster, the Invisible Man, Dracula and other iconic literary creatures into one and places them in the all-new context of Dark Haven. Death Ray Films, director Patrick Tatopoulos and Grevioux have teamed up to develop the story for the big screen. It's also a comic series from Darkstorm Comics, set for release later this year.

Grevioux said that his prescription for success is to take the source material seriously rather than reduce it to a reference or punch line. "These things could work together, given the proper execution and respect for the material," Grevioux said. "If you look at it more realistically, and look at it in a cooler sense, I think you're really going to get more out of it. Looking at what is traditionally considered silly or sophomoric by the public at large, I think you could take and make them very serious and get a really cool action-adventure piece out of it, and that's what we're trying to do here."

SCI FI Wire spoke exclusively via telephone to Grevioux about I, Frankenstein. The following is an edited version of that interview.

What was the starting point of this, first in conceiving it and then translating to a live-action feature?

Grevioux: Like with Underworld, my inspiration has always been the classic horror movies, in particular House of Frankenstein, which had Frankenstein, the Wolf Man and Dracula all in one film. Looking at stuff like that, I conceived building a world where all of the classic ... monsters of literature lived in the same city, called Dark Haven. So I thought it would be cool to put them in a modern film-noir kind of setting, where the public is completely unaware that these creatures of legend actually exist. I thought that would be interesting, and have Frankenstein as the star, so it was kind of cool, it was kind of fun. Like, one of the things that I've always wanted to see is Frankenstein versus the Mummy, so in a sense we'll get a little bit of that, things like that: pairings of different monsters, how they would interact in this city.

Given the mixed reaction to films like League of Extraordinary Gentlemen and Van Helsing, are there things that you're aware of in previous attempts to combine different monster mythologies that you're applying to I, Frankenstein to make it different or to capitalize on what you think has previously worked?

Grevioux: It's all in the execution and how you do it. Looking at all of the elements with Underworld and the people involved, myself and [director] Patrick [Tatopoulos], we're trying to take this material seriously. That's one thing. With a lot of horror stuff, you can go one way or the other—either silly [and] comedic or dead serious. The concept for Underworld wasn't met with a whole lot of enthusiasm at first. Even Len [Wiseman], our director, was like, "Dude, is this going to work?" And I needed to convince him. That's what I did, and the thing is, when you see the comic book, you can see how this is going to be done—in a way where people will take it seriously. Like the way The Crow was done. The way Underworld was done. They turned out to be pretty successful franchises, and I expect this to be the same. 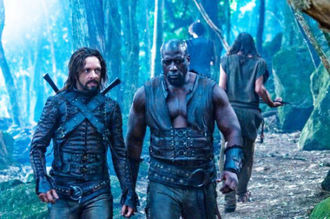 Michael Sheen (left) and Kevin Grevioux in Underworld: Rise of the Lycans (click for larger image)

How carefully are you in developing each monster's origins? Are you taking for granted each character's existence, or do they have individual mythologies?

Grevioux: We have individual mythology for each of them, but we also have an overarching mythology for how and why Dark Haven, the city where they dwell, exists. Why are all of these monsters together? What happened? What is the world like? So we are doing a little bit of both: taking the essence of their literary origins and fashioning something different altogether.

Why choose Frankenstein's monster as the main character?

Grevioux: I guess because he's just the classic motif of an action hero: He's big and strong. Also, I guess if you want to get down to a more, I don't want to say existential sense, but he was the first sci-fi piece that ever existed. Mary Shelley's Frankenstein is what kicked all of this off. Using Frankenstein and looking at the original novel, this was a very intelligent creature. He was smart, he was cunning, he asked questions about his existence, things like that. There is a lot of mythology there that you can pull from in terms of his motivation—why he is like he is right now—and I like that.

Does your idea draw more from the literary origins of each character, or do you filter the monsters through some of their cinematic interpretations?

Grevioux: For me it's mostly through their literary incarnations, but of course you can't help but be partially influenced by what has gone on in books, novels [and] movies. Any number of individuals have done comics, books and movies about Dracula, and the same thing about Dr. Jekyll and Mr. Hyde. If you look at the panoply of history, you have vampires, werewolves, mummies, zombies, ghosts; all of these things form a big hodgepodge of creativity we can pull from.

Is this going to be imagined in the same way as Underworld, where the mythologies are applied to a more straightforward action template, or are the characters relying on their own powers for their identities? The first image from the comic features Frankenstein's monster with a gun.

Grevioux: A little bit of both. These creatures are interesting because of their origins, and even though we're flipping things on its ear for a modern audience and a modern-day city with modern cultural motifs, we're still going to keep a lot of that. But make no mistake: This still will be a cool action film.

Is it a foregone conclusion that you will have a role in this film, as you did in the Underworld series?

Grevioux: Yes, most definitely. Any time I create something, I create a part of myself.

Can you talk about what that is?

Grevioux: Not quite yet. [laughs]