Stephen King's The Dark Tower—an epic dark-fantasy series encompassing seven novels and a smattering of shorter stories that also touches on nearly every other major work in his canon—is once again moving forward to the screen, according to Deadline NY. That's the good news.

The bad news? The property has passed out of the hands of Bad Robot, J.J. Abrams' production company, and is reportedly close to being picked up by Brian Grazer and Ron Howard's Imagine Entertainment. Grazer will produce, Howard will direct and (gasp) Akiva Goldsman—the man known for such fan favorites as Batman and Robin and the film version of Lost in Space—will write the project, which is being envisioned as both a film and TV franchise, with an initial film trilogy leading to a small-screen series.

While we like that idea in theory, we shudder at the thought of Howard and particularly Goldsman getting their hands on this material. We have nothing against Howard and have enjoyed a number of his pictures as a director, but in recent years he's continually gone for projects that amount to little more than forgettable marketing bonanzas (The Da Vinci Code) or bland "prestige" films (Frost/Nixon). The Dark Tower is weird, often violent, and packed with bizarre nightmare imagery that is unlike anything Howard has ever tackled.

As for Goldsman—his resume speaks for itself. His script for Batman and Robin helped nearly destroy that franchise once and for all, and for the most part his accomplishments as both a writer and producer, with a few exceptions (I Am Legend, while not great, was better than expected), are rarely more than mediocre. 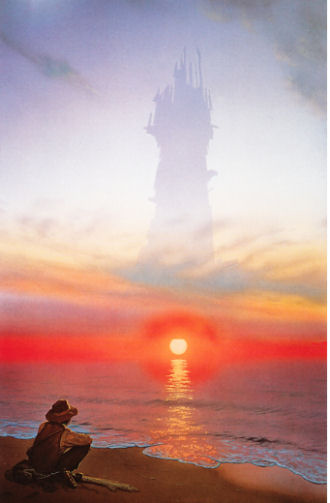 The Dark Tower is, if you're not familiar with it, King's The Lord of the Rings, except bigger. It takes place in several different timelines and universes, spans all of existence and revolves for the most part around Roland, the last in an order of noble gunslingers who roam a world that's part Old West, part post-apocalyptic wasteland and part fantasy landscape. With the fabric of reality beginning to come apart, Roland goes on a quest to find the Dark Tower, which holds all of existence together, before it can be toppled by the malevolent Crimson King.

What's cool about the series is that it incorporates characters, themes and story threads from King's entire output, with elements of books such as The Stand, 'Salem's Lot, Insomnia, Black House and more all finding their way into the cycle. Yet The Dark Tower is also unlike anything else King's ever written, combining horror, fantasy, science fiction and the western into one surreal and unique package.

That's why Bad Robot—the company behind Lost, Fringe, Cloverfield and more—and its key personnel—Abrams, Damon Lindelof and Carlton Cuse—were in many ways perfectly suited to the job of building the Tower for the screen. All three have publicly stated their love and respect for King's work and regard The Dark Tower as awesome, like many fans of the author. The surreal, reality-bending nature of Lost and Fringe shows that they can handle complex metaphysical material. But apparently they were never able to work out a suitable way to adapt the project and ultimately ran out of time.

What do you think— can Howard, Grazer and Goldsman get the job done? Can anyone?