Alex Proyas told SCI FI Wire that his upcoming sci-fi thriller film Knowing is the closest he's ever come to realizing a film as he'd initially conceived it.

"I just expect a lot from my films, and if I walk away even 50 percent satisfied, that's usually pretty good," said the director of The Crow and Dark City. "But in this case I'm extremely satisfied."

In the movie, which opens March 20, papers encased in a 50-year-old time capsule contain coded predictions of every major disaster since it was buried, and also prophecies of disasters yet to come. Nicolas Cage plays a professor and father who cracks the code and races the clock to stop imminent disasters.

Garage Days was probably your smallest film, and I, Robot was huge. Would you say that Knowing falls somewhere in the middle?

Proyas: I think Knowing is my sweet spot, actually. It's not a small budget. It's going to be somewhere around the $65 million mark. It was a great experience, because I had on Knowing a terrific studio who were extremely supportive, and they gave me the resources that I needed, no more, no less, and that's all a filmmaker can ask for. We got exactly what we needed to make the film properly. To me, that's what you want out of a production situation. Sometimes when you've got a much bigger budget, [as] in the case of I, Robot, that comes with all sorts of strings attached and is often not the be-all, end-all. Sometimes you can make a lot more out of a smaller budget, make a more effective end product. 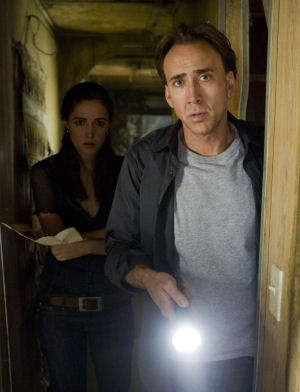 What made Nic Cage right for his role?

Proyas: The reason I've always wanted to work with him, and why I'm such a big fan of his, is that he has such an incredible range of work. Nothing is the same. Every role he takes on he takes on under its own unique set of rules. That's why he is such a varied actor. I see that as an enormous positive. I really respect that about him. He's not trying to be Nic Cage each time. He's really trying to serve the character and the story, which is as much as you can ever ask of any actor. And in this case he's certainly done that. We approached the performances in this film in a very naturalistic way. We talked a lot about how we wanted the whole film to feel very real and very grounded, so that when the characters became involved in this escalating, strange universe that they get involved with, that we care about them and can really follow them through the whole story. ...

You may still be way too close to Knowing to answer this, but how satisfied are you with the finished film?

Proyas: I'm very satisfied. I think it really is, in my opinion ... I think I have come the closest ever to something that I feel is what I conceived of in the beginning. I'm not the sort of guy who's easily satisfied with my own work. I'm my own worst enemy in that respect. I just expect a lot from my films, and if I walk away even 50 percent satisfied, that's usually pretty good. But in this case I'm extremely satisfied. I think it's a very effective film, if I might say so myself.

A lot of people love your film Dark City. We're just wondering, if you made that film today, or if at the time you made it you had at your disposal the kind of digital effects technology that you employed on Knowing, how different might Dark City be?

Proyas: I think it would be very different. Really, for me, that was my last shot at building some massive sets. We built a lot of the streetscapes in full scale on a soundstage, and that gave the movie a certain quality. These days, even if I wanted to do it that way, I think it'd be unlikely. I don't think the studios would let me do it that way, because it's just so expensive. We'd definitely be in the realm of creating more of it in CG. So for good or bad, that would be the reality of that film. It certainly would be different, but I don't know if I could say it'd be better or worse. It's really hard to judge that, but it definitely would be a different-looking film, for sure.