Ah, the benefit of shooting films back to back. We might still be a week away from the release of the first film in the Hobbit trilogy, but that hasn't stopped a pic from the third film in the series from making its way out into the wild. Want to see one of your old pals from Lord of the Rings back in action?

A picture from a new issue of Entertainment Weekly has surfaced showing a screen grab from There and Back Again, which will close out the trilogy in 2014. The first installment is dubbed An Unexpected Journey, while the second film, set for 2013, has been named The Desolation of Smaug.

The new pic shows the return of Elven warrior Legolas (Orlando Bloom), who also starred in the original Lord of the Rings series. Elves age at a different rate than humans, so despite The Hobbit being a prequel, Bloom's character still fits. We also get a look at the character Bard, played by Luke Evans, who will join in on the action at some point (apparently with Legolas).

Producer Philippa Boyens said both characters will have larger parts in the film than they did in the book (especially Legolas, who wasn't in J.R.R. Tolkien's original prequel):

"Bard is an interesting character, but [in the book] he's kind of a random character who comes in after the fact. We take more time introducing him. We know from what follows that he was a father, so we [explore] that. I don't think we take liberties, because it's all there in the storytelling."

Why did this pic come out before a shot from Desolation has even been released? We have no idea, but we're not going to look a gift hobbit in the mouth.

Check out the pic below (click for larger) and let us know what you think: 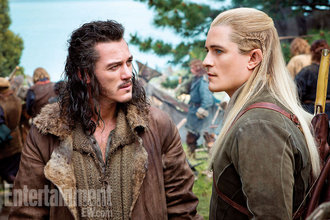 The first entry in The Hobbit series opens Dec. 14.