AMC's upcoming remake of The Prisoner is big on issues, metaphors and action, and it's up to Lennie James' 147 to add a bit of human emotion to the proceedings, the English actor told us.

Based on Patrick McGoohan's groundbreaking 1967 ITV series, the miniseries again focuses on Number Six (Jim Caviezel) as he tries to escape the mysterious Village and face off against Number Two (Ian McKellen).

James' part is specific, he said. "I call it the Morgan Freeman role," James joked in a group interview this week in Pasadena, Calif., during the Television Critics Association summer press tour. "I play the heart and the soul of the lead character. When Jim's character first arrives in the Village, almost his first stop is my taxi. From then on in, both of our lives are inextricably linked together throughout the six episodes."

Six resolves that keeping people prisoner in a village, no matter how nice the accoutrements, is just plain wrong, and he is going to put a stop to it. 147 teaches him there's more to life than that.

"I think because of the sense that he is a rebel, and he is fighting the system, and he's a man involved in a battle, every now and then, he needs to be reminded that it's possible to care about people," James continued. "You don't have to fight everybody, and sometimes you need a friend. That's what my role provides him." 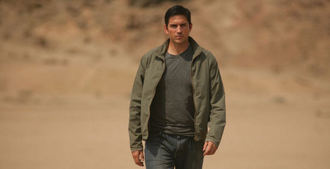 Maybe if Six just met a nice Villager and settled down, he'd enjoy it, like 147? "His life revolves around and is made complete by his wife and his child," James said. "He has a wife he adores and a child who is the center of his universe. He is totally and utterly happy in that world. In fact, he believes that his family has saved him. He has no reason to rebel, he has no reason to question until Jim gets into my taxi."

James added that 147 is based on a character from the 1967 series, but is more involved with the overall story of the remake. For the new version, James did not create a backstory as to how he met a woman and married in the Village.

"Those are questions we don't ask," James said. "I didn't necessarily need to do a backstory, because during the course of the six episodes, you will find out why my character accepts his position, or why he did."

Though James hails from London, his character, like Caviezel's new Six, is American, and James had to use a U.S. accent for the role, not unlike the one he employed in his last TV series, CBS' Jericho. "I was told not to be [English]," James said. "There is a reason for it, but I can't tell you why. The Village is a very eclectic place, so some characters are English, but most of us are American."

Viewers will only have to wait six hours to find out all the answers, as opposed to the original show's 17. At least James promised there will be some satisfying answers. The ending of McGoohan's series still baffles some of its longtime fans.

"This version is a little bit different," James said. "I think McGoohan, in his brilliantly kind of Irish tricksterness, enjoyed the fact that no one understood it. This is a kind of reworking for the year 2009/2010. There is a conclusion to the whole thing. There is a conclusion that people will be satisfied with, but it's not definitive. We couldn't just kind of wrap it all up."

The Prisoner premieres on AMC in November.