Tonight's episode of Fox's Fringe promises to answer questions about the Observers. And a future installment will give us what we've been waiting for: The first face-off between Walter Bishop (John Noble) and his former lab partner, William Bell (Star Trek's Leonard Nimoy), which Nimoy told us will finally address their relationship. (Spoilers ahead!)

"In the episode that's going to air that I recently filmed, there's some more information about what happened between William Bell and Walter, which I think will be useful," Nimoy told reporters Monday at the Trek DVD/Blu-ray launch party in Los Angeles.

Nimoy said it was great finally to share screen time with Noble. "I did, I did," Nimoy said. "He's wonderful. I mean, he's got a handle on that character, and he does it brilliantly."

And that will be that for William Bell, at least for now, Nimoy said: His current deal for Fringe guest spots is complete. "We agreed that I would do three episodes," he said. "I have filmed three. Two have been on the air. One will be airing sometime in the near future, and that's the extent of my commitment so far. I think the work that I did served a very important purpose, which was to explain the alternate side and what the major problem could potentially be."

In tonight's episode, "August," writer/producer Roberto Orci told us that viewers will meet "more than a handful" of other Observers and learn more about their culture. (So far, we've met only one Observer, played by Michael Cerveris.) 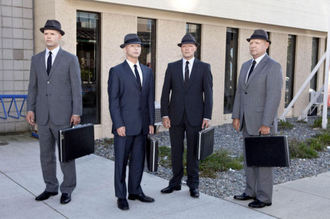 "Individuality will be one of the things that they will be fanatically struggling with, actually," Orci revealed in a separate interview. "That was a fun one, because that one was one where you're finally getting to pay off things you've been setting up for a year. You finally get to open the toy box and really play with those toys."

The Observer we know is enamored of spicy food, because his sense of taste is dulled. Other Observers might have different food-related quirks. "They all love flavor," said Orci.

We also know that the Observer just witnesses events, so it must have been difficult to construct a plot that made his whole race central to the story. "Depends on how involved they get, right?" Orci teased.