We know, you've seen Raiders of the Lost Ark a hundred times. So have we. But have you ever noticed an appearance by two characters from co-writer George Lucas' other iconic franchise? That's right. You might not have known it, but Raiders features droids.

No, R2-D2 and C-3PO don't pop up in one of those scenes where Indy's running around battling Nazis (though that would have been awesome). Their cameo is a bit more static. Check out the photo below of Indy rooting through an Egyptian temple, and pay particular attention to the hieroglyphs on the left.

Thank the Maker! The 59 best droids in the Star Wars universe, ranked
The best scene in Star Wars is when the Ewoks mistake C-3PO for a god in Return of the Jedi 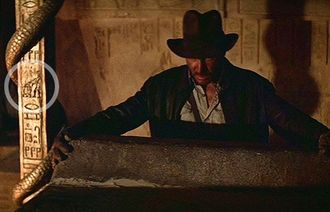 And here's one more, even bigger cameo, tucked back in a temple. 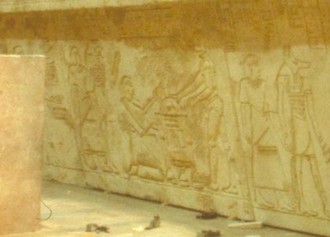 Obviously, Lucas was just excited to work his robotic creations (who were still fairly new to the world at that point) into his next major project, and it was actually kind of fitting, since the Egyptian sequences in Raiders were filmed in some of the same Tunisia locations as Star Wars.

Knowing George Lucas, it wouldn't be surprising to see a digitally manipulated Indy/Star Wars crossover sometime in the future (after Kingdom of the Crystal Skull, we can't rule anything out). For now, though, this is just an amusing little side note from a great movie.

Oh, and here's one more note of Star Wars/Indy crossover lore. In Temple of Doom, the club in the opening sequence is named "Club Obi-Wan."

And check out these other little-known sci-fi facts:

The accident that gave us the lightsaber

Scully stood on a box to film X-Files

The brawl that got Mel Gibson the Mad Max gig

(Via Geeks Are Sexy)