Sometimes it is difficult being a Star Wars fan. On the scale of actual problems, this is the definition of small potatoes, but the fandom has truly taken a shift into the unbearable side of discourse more often than not. There is certainly room for critique when it comes to the things that we love, but if you ever wade into Star Wars Twitter, any mention of Th* L*st J*d* — the second-best Star Wars film, fight me — will ruin your mentions for a week. Honestly, that’s a shame. Star Wars has and always will be a bedrock property when it comes to the house that fandom built, and the films are just the tip of the iceberg for real life the networks of fans as vast galaxies that are seen onscreen.

Looking for Leia wants to remind folks that it really is wonderful to be a Star Wars fan. Focusing on the stories of women and nonbinary folks, Looking for Leia is a new series created by Annalise Ophelian, a queer documentary filmmaker who was determined to tell the stories of Star Wars fans who are often forgotten or overlooked entirely. While the “traditional” and stereotypical Star Wars fan is the basement-dwelling white guy who refuses to grow up and spends his time trolling Reddit, Looking for Leia gently reminds us that that is simply not the case. Starting all the way back with the fandom zines that were written after A New Hope hit theaters in 1977 all the way up to the fans literally building their own droids using 3-D printers, women and nonbinary people have been the backbone of fandom since the very beginning.

Author and fan academic Tracy Deonn lays it out in the first episode, offering an example as to why Star Wars encourages fandom at a level at which few other properties can play.

"[Star Wars] gives fans, specifically participatory fandom type fans, the opportunity to dig in and find a crack in the story and get themselves into it like water, and then like ice expand and be able to live in that world. And not every fandom has enough detail going on in the background to really allow fans to play, and I think Star Wars is brilliant at this."

She’s absolutely right. To the untrained eye, Star Wars is just a movie franchise, but there is such a complex ecosystem of books, games, fanfiction, and deep lore that the movies are really just a jumping-off point. Found family and building something worth fighting for are at the heart of Star Wars, so it makes perfect sense that the friendships and creativity that spring up in the fandom mirror that message.

However, no matter where the offshoots head, Leia is the center for so many. From snapping “Somebody has to save our skins!” while she snags Han Solo’s blaster to becoming a general in the Resistance, Carrie Fisher’s Leia has been a beacon of hope for so many. Leia is the kind of hero that mothers pass down to their daughters, as Looking for Leia highlights with Alice Dauphin and her young daughter, Natalie. If your heart doesn’t grow at least three sizes at the sight of the mother-and-daughter duo wearing the classic white space dress while adding their own twist on the iconic double buns, there might be something clinically wrong with you.

Equally due to Fisher’s own magnetism as it was to the character’s incredible journey, Leia became a symbol of perseverance, power, and heroism. For fans absolutely desperate for representation, Leia was like that first drink of water after wandering the desert. And as the series has progressed, representation has (slightly) improved as well. The addition of characters like Bodhi Rook, Finn, Poe Dameron, and Rose Tico offers new in-routes into this particular universe for so many fans who have waited to see themselves represented onscreen. Star Wars certainly has a way to go — quit sidelining Rose and let Stormpilot happen, damn it — but hopefully the franchise that has long been so resolutely white and straight will become more inclusive and representative of the fandom that helps keep it alive. If you know where to look, there is truly something for everyone in Star Wars, and Looking for Leia does the important work of showing viewers the way to their people.

In The Last Jedi (oops, I forgot to censor that one out), Rose declares, "That’s how we’re gonna win. Not fighting what we hate, saving what we love." These are words that Star Wars fans would do well to remember. While the internet is sure to be hell in the days, weeks, months, forever after the release of The Rise of Skywalker, cling to the parts of Star Wars that bring you happiness. Looking for Leia is a reminder that there is truly so much joy in this galaxy far, far away. You just have to know where to look.

You can watch all of Looking for Leia now, including one episode right here. 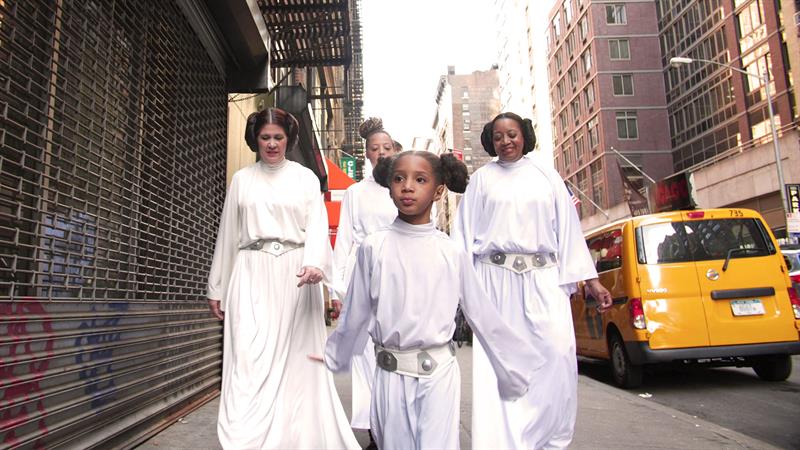 The views and opinions expressed in this article are the author's, and do not necessarily reflect those of SYFY WIRE, SYFY, or NBCUniversal.