Rumor of the Day: Morbius the Living Vampire appearing in Spidey 2

We'd already heard that Jamie Foxx would be the main villain, Electro, in the followup to the latest Spidey franchise, The Amazing Spider-Man—but could it be that he won't be the only villain the film will have?

It seems that actor Asim Ahmad may have been cast to play a scientist by the name of Michael Morbius in the Spidey sequel. For any Marvel fan, that name should ring a loud, undead bell. Morbius is the quintessential vampire of the Marvel universe.

10 Spider-Man suits we want in the new PS4 game next
The episodes of The Spectacular Spider-Man, ranked

In the '70s, when the comic authority lifted its ban on the use of vampires in comics, Marvel immediately leapt at the chance to have a new kind of fanged villain. Morbius wasn't like the usual vampire. As a man with a rare and fatal blood disease, the doctor was working to find a cure, but instead gave himself strange, vampire-like addictions and powers. He had a brief but spotty run in the '70s and a series of his own in the '90s, but hasn't been around much since.

But could Morbius be about to return in a big way? He'll be appearing in Amazing Spider-Man #699.1 this week in addition to the possibility of his appearance in the Spidey sequel.

But will he actually be in the film, or is this just a rumor? Well, while there has been some denial, the actor's own website confirms it. 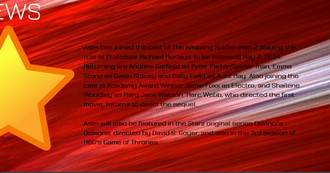 As to how big the part will be, it looks to be pretty minor. Ahmad tweeted earlier that it would only be about two pages' worth.

What do you think? Should Marvel and Spidey embrace the massive popularity that is vampire fiction?