Lost's 'Hurley' looks ahead to the show's finale

When producers Damon Lindelof and Carlton Cuse set an end date for ABC's Lost, both the fans and the actors got to know that they were working toward a goal. No more placeholder episodes. Everything has been driving toward the ultimate resolution. Now that the final season is here, they're starting to get sad, according to cast member Jorge Garcia, who plays Hurley/Hugo.

"It's bittersweet, knowing that this is the end, and there's going to be a lot of final moment pangs coming up," Garcia said in a group interview at Comic-Con in San Diego last month. "Like the last time these two have a scene together or the last time we're in this set, all that stuff is going to happen. It's going to be kind of a melancholy year, I think, but I think the stories should be good. And, it's good to get out when [the fans] are still hungry."

10 years later: What the cast and crew of Lost have to say about that controversial finale
Jorge Garcia unravels the brain-twisting mysteries of Alcatraz

Garcia added that he is not worrying about the overall end of the story. He stays focused on Hurley's role in that puzzle. "I mean, I'd definitely like to be there at the end," Garcia said. "Beyond that, who knows? There's a great freedom in knowing that my part of the pie is just this little piece, and everything else I don't have to worry about. There's a great freedom in just not knowing what's coming, letting scripts just show up and taking it chapter by chapter."

Season five introduced time travel into the storylines, so Garcia has brushed up on quantum theories and is ready to handle whatever complications arise in the aftermath of Juliet's detonating the atomic bomb in the season finale. Garcia said he's spent time in between takes reading books, analyzing situations that Hurley would debate on screen with Miles (Ken Leung). Has this past already happened? Can they change anything? Can you be killed here?

"Even that stuff was cool, and it got really crazy, but you can only take that type of information in little pieces," Garcia said. "Then you've got to kind of walk away, just work on that one little fact and be like, 'OK, I think I got it, I think I'll accept that. Now, what's the next detail that you want to go into?' It definitely got a lot more heady in that, certainly." 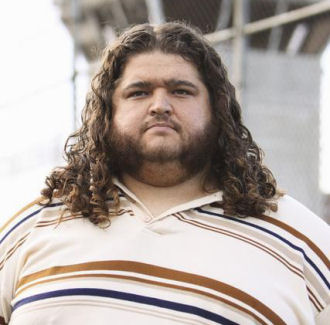 The more tragedy Hurley suffers, the more his comic relief gives way to sadness. Whether Hurley's final scenes are funny or dramatic, Garcia is just happy with the range of emotion he's gotten to play.

"Sometimes the darkness is kind of fun as an actor," he said. "I have gotten some great moments and some great opportunities. Lost has allowed me to do romantic scenes, action-star type of stuff—I mean, running away from an exploding plane wing is still, like, a huge highlight for my career, and driving the getaway van. There's been a lot of the cool stuff that I'd never thought I'd really be doing as an actor, so all that's been just awesome. Whatever they come up with, I'm really [game]."