Marc Singer, who starred in the original 1980s sci-fi miniseries V and subsequent spinoffs, told SCI FI Wire that he would love to take part in ABC's upcoming re-imagined series, which is slated to debut after January 2010.

Singer played reporter Mike Donovan in the original miniseries, about an invasion of apparently benign aliens who turn out to be sinister lizard creatures with a nefarious agenda.

The new V is a re-imagining, about the world's first encounter with an alien race in which the aliens call themselves the Visitors and have a seemingly friendly agenda that may or may not be a cover for something more malevolent. The new show stars Elizabeth Mitchell as Erica Evans, Morris Chestnut as Ryan Nichols, Joel Gretsch as Father Jack Landry, Lourdes Benedicto as Valerie Stevens, Logan Huffman as Tyler Evans and Laura Vandervoort as Lisa, with Morena Baccarin as Anna and Scott Wolf as Chad Decker. 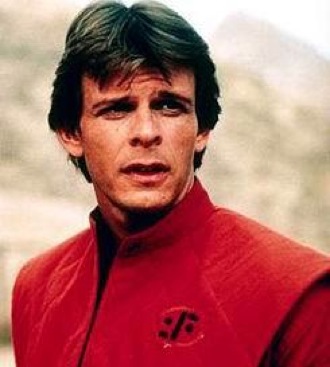 For someone who was a major part of the original series in all its forms, I'm dying to know what you think of V returning to television.

Singer: I think a good story can always be retold, and I think it is a good story. I think its relevance is as powerful today as it was then. The same forces of subversion and the same sort of fascist tendencies are afoot, and I think it's a cautionary tale that bears retelling.

Everyone who watched the original show knows the ending. Do you think it can work even with that knowledge?

Singer: Well, I do. ... I don't know if they will keep the original ending or perhaps modify it. I think it's more in the telling of the tale of society being subverted. And society being wooed into channels that are disruptive and dumbed down. I believe that those are the ways in which the story's retelling sort of supersedes that plot line, because it's the human interaction. It's the failings and dangers of our own nature that lie at the heart of this story.

Last time I spoke to Robert Englund [who played Willie in the original series], he said he'd like to do a cameo in the new series. Would you be interested in doing one?