For months now, it seemed that one of the worst-kept secrets about The Dark Knight Rises was the exact nature of the role played by Marion Cotillard. And now Cotillard herself has muddied the waters even more.

With much about The Dark Knight Rises still yet to be revealed, a lot of speculation has centered around the Oscar-winning French actress' character of "Miranda Tate," said to be a board member of Wayne Enterprises who insinuates herself into the personal life of Bruce Wayne (Christian Bale). The few brief shots of her in the trailers have shown her flirting with and kissing the reclusive billionaire, but that's about it.

Of course, most fans have assumed that "Tate" is a cover for Talia al Ghul, the daughter of the deceased Ra's al Ghul (Liam Neeson) from Batman Begins, with the idea being that Talia gets herself embedded deep in Wayne's life and business while also being the secret power behind Bane (Tom Hardy) and his mercenary army.

Well, according to Cotillard, we've got it all wrong. In a new interview with the Hollywood Reporter, the actress definitively states that she is not Talia, but that Miranda Tate is simply a businesswoman who "is fascinated by Wayne Enterprises. They go through difficulties, and she wants to help provide the world clean energies. She's a good guy." Asked if she stays a good guy all the way through the movie, she replies, "Yes."

That would seem to settle it, right? Except there's this: 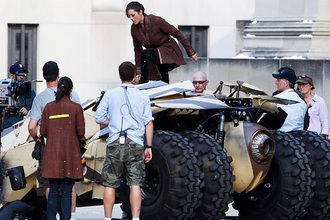 Yes, there are those pesky unofficial photos floating around of Cotillard on the set in what looks more like mercenary gear than business chic, surrounded by armed guards and even climbing into a tumbler. Sorry, Marion, but you don't seem to be heading to a board meeting in that shot, do you?