Are you ready for some high-octane boys' club fun when Fox's Human Target returns for its second season tonight? Well, get ready for changes, with the addition of two ladies who are bound to complicate the lives of Chance, Winston and Guerrero.

Star Mark Valley—who plays the assassin-turned-hero Chance—promises things are only going to get bigger and more interesting this season as he gives us seven reasons you're not going to want to miss tonight's season-two premiere.

The new ladies of Human Target

"It's a party with three guys sitting around watching TV, and then two women show up, and it just makes things a little more interesting. [They] might have to change the channel sometimes now, you know. So it really brings in some inherent conflict, as well as just the excitement that having women around," said Valley.

"At first we meet Indira Varma's character, Ilsa, who shows up as like a kind of wealthy financier and widow who has someone chasing after her and just wants to hire the best to protect herself," he said. "So instantly we see her trying to put our team back together again, because she needs us. That generally is how the team comes back together, is we all need each other in some strange ways, and it pulls us together."

During their mission to save Ilsa, "we meet a young thief, and she's working for the other team, but we don't really know how involved she is with them. Chance and the rest of the crew realize how talented that this kid is—and it's Janet Montgomery's character, Ames—and maybe see a bit of her in ourselves and realize, though, that she's at a point where she could either go to the wrong side of the tracks or she could use her talents for the forces of good. So I think we all want to bring her on board as well. It's based on mutual need. We all end up needing each other for something, and then we come together," he said.

We'll find out more about Chance

"On one hand we have a guy who was an assassin, who carried out this job and was a spy and a soldier in some ways," said Valley. "It takes a real ability to shut off yourself emotionally in order to accomplish those sorts of tasks. But also we have, on the other hand, a guy who likes to have fun. He likes people to some extent, and he has a bit of charm about him, and there's an element of compassion and empathy to him as well. So I [am] interested in wearing out that path between those two a little more."

One thing we'll learn is that "Chance doesn't really know everything as well as he might think he does. ... There's a scene in the first episode where he goes into the Swiss bank and he tells everyone to get down on the floor, and they don't do it, so he fires the gun off. So I asked if I could do it in French, and ... was like, 'Yes, go ahead, dude. Give it a try.' So I yell it in French, but my actual translation of it wasn't 'Get down on the floor!' It was, 'Everyone in the world get in the basement, get underneath the floor!' Everyone looks at me quizzically, and then I realized, okay, I'll just fire the gun. That will get their attention," he said.

"So hopefully we're going to find some more opportunities where we see that Chance, yes, he is adept and he can do a lot of things, but he makes mistakes like everybody else. One of which is that he can't really speak French as well as he thinks he does," said Valley. 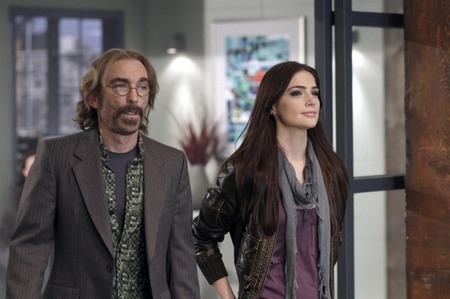 "Explosions are a little bigger. The fight sequences, they aren't quite as long as they were last season, but they're much more intense. My stunt double, Jeff Robinson, seems like he's improving faster than I am, so it's really throwing a challenge out there for me," said Valley. "We also have a shorthand working together, like we have this kind of ... array of stunt people that come in under different guises and play bad guys, and we're all used to working together and working with our camera crew, so we can put things together a little bit more quickly, so our fights might be a little bit faster and intense."

Valley acknowledges producer/director Steve Boyum as one of the key factors in their stunt work "who is with us out in Vancouver 24 hours a day. The preparation that goes into ... finding a feasible or a cost-effective way of producing these stunts, it's just amazing the way he does it. He was a stuntman before, and he was a cameraman before. He's been around for a while, and we're really profiting from his experience at being able to lay out these scenarios where we can work and play," he said.

Romance is NOT in the cards for Chance, at least for now

"There's not a lot of time for a love interest when the bullets are flying," he said. And when it comes to Chance and Ilsa, "I think if there is a love interest thing it's going to catch them by surprise. It's not something either character is actively pursuing or avoiding. I think when you have a man or woman together on screen, it does sort of beg the question at some point. But these are relationships that are much more based on need and respect and ability, as well. There's more of a one-upmanship going on with Chance and Indira's character right now that I think would be going on with a guy in that position."

Valley promises, "It's not turning into Cheers with Diane or anything. Do you know what I mean? We're not going to lose Chance or lose the relationships that these three guys have with something like that."

The team's protection company gets bigger

"The first season we really kind of established the links between Winston and Guerrero and somewhat of their past, and now all of a sudden we've just thrown some octane into the mix," said Valley.

However, with the addition of the massively rich Ilsa Pucci, the team's resources become almost limitless. "They have a much bigger business than they had imagined, and there's more people than they've imagined, so I think it's like a company that expands, and right now it's just trying to find its bearings based on the new scope."

"We are having an awful lot of fun," said Valley, crediting executive producer and show runner Matt Miller for upping the fun factor. "This show we're all being encouraged to find appropriate opportunities for humor. ... It's not necessarily funny lines, but funny situations and specific characters who react off of those, and that's where a lot of our humor comes from. ... The overall tone is we're still doing the nuts and bolts shoot-'em-up Human Target stuff, but there is a little more room for humor."

Here's a preview of tonight's episode:

The comics world reacts to the loss of Len Wein, co-creator of Wolverine
Human Target star talks about the crazy stuff he's had to do