Masi Oka: How Heroes will try to win back the fans

Masi Oka, who plays the time-traveling hero Hiro Nakamura on NBC's Heroes, told reporters that the show has weathered its problems and will return to its roots with the upcoming volume entitled "Fugitives."

Oka spoke to journalists during a conference call yesterday. During the conversation, the actor addressed the show's problems and creator-producer Tim Kring's solutions, previewed the upcoming "Fugitives" arc and discussed the departure of writer-producers Jesse Alexander and Jeph Loeb and the return of writer-producer Bryan Fuller.

The first episode of the "Fugitives" volume, written by Kring and directed by Emmy winner Greg Yaitanes, premieres Monday at 9 p.m. ET/PT. Following are edited excerpts of the interview with Oka.

The last cycle of episodes, the "Villains" arc, got a bit of a critical beating, though most fans thought it was redeemed by the last couple of episodes. What can we expect with the new volume?

Oka: Pretty much, to be exact, we're going to go back to the fundamentals that made the show really great and what's kept it grounded, with it going back to the central characters and trying to tell smaller stories, but with big action. There's going to be more character-based [stories] as we see them finally come together towards the end to try to save themselves.

In general, do fans and critics need to be more patient with the show?

Oka: It would be great if you could. I mean, we can't ask for that, of course. The creative process is one ... that kind of builds, and Tim also has a great map to where we go, but at the same time there's a collaboration that happens that allows us to go from interesting places and allows us to discover. And we hope that the audience and the fans will go on this discovery and journey with us knowing that there will be a great payoff.

I think with all our volumes we've sometimes have slow starts, but we always pick it up at a high gear towards the end. And I think because a show like this takes such risks and makes bold choices, it takes a little bit of time for the audience and the critics to get accustomed to this kind of new kind of journey that we're starting to take. And once everyone is on board, we hit the ground running. So, you know, we do ask [for] maybe some patience from the fans and the audience. If we can ask for that, that'd be great.

Following up on that, did you personally feel the show had lost its way, or were people just being too hard on it because it came out of the box so big, so strong and so popular?

Oka: I don't know. It's so hard with the creative process, because we tell so many stories so fast, because Tim is all about getting answers quickly and satiating the audience's appetite for what happens next. You're on the edge of your seat. And season one was so perfect, ... and there's so much story that you can tell, ... it becomes difficult. To shake things up, you do need to make different choices, bold choices. So I don't think it's necessarily lost its way, it's just trying different paths, and sometimes it works and sometimes it doesn't work. And I think when we started volume three they found a different path, and they found a way to make it work.

Volume four, "Fugitives," is another completely [new arc]. We're going back to the grounded characters and the central characters, [and] people trying to live their ordinary lives being hunted now. And that's a completely different story than we've been trying to tell. So it might take a while to get us accustomed to the "usual heroes," but it still has the core ensemble drama. So I'm not sure if it's lost its way, it's just always different. Some people will respond to the way the story is told in the one volume and maybe not to another. 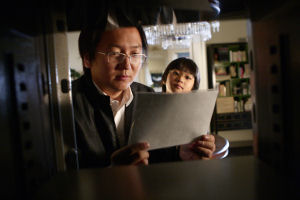 What will Hiro be up to in this new arc?

Oka: What's interesting about Hiro is he starts off powerless. I find it actually interesting to play a powerless character, because you kind of get the joy of rediscovering that power and what it means to be a hero without powers. So having someone who had had powers and going to someone who's powerless is an interesting character mindset. You kind of fall from grace in many ways. So it's about adjusting to that, and how do you live your life knowing that once you were a hero and that you can still be a hero by helping others ... and possibly trying to get the powers back?

Can you talk a little bit about the Hiro-Ando relationship and what we have to look forward to in that regard?

Oka: In the beginning, Hiro's powerless, and Ando has a kind of supercharger power, so Hiro is trying to nudge him on. In many ways he realizes, "OK, well, now he's had his turn, so he needs to kind of step up and see what he can do." And he takes on pretty much the role of the butler. He becomes Alfred in many ways. He's trying to make a Batman out of Ando, but Ando is reluctant, and he only cares about girls right now. So Hiro is trying to make him use those powers for good, to save other people. And of course, Hiro ends up getting in trouble, and Ando ends up helping him. But then, you know, then it's about them trying to work together and find new ways to get [Hiro's] power back.

What has been the impact of Bryan Fuller's return to the show?

Oka: You know what? First of all, my heart goes out to Jesse and Jeph. They were amazing writers, and I love them. They're my friends, and they're working on their own shows already. So I'm so glad that they're doing well. I think that's always a hard loss, one you actually don't have control over. But with Bryan coming back I think it's definitely a new dynamic, and it's such a great energy that he brings to the show. He's such an accomplished show runner, with great ideas, from Wonderfalls and Pushing Daisies. And he was on the show from season one, so he knows what the process was. He knows what made it great.

Then, having stepped out of it for a season and a half, I think he had such a subjective view on how the show was, what the show became, and how it kind of, in his mind, took a different path. And having him come back, being so excited, it's like, "Oh, this is what was great. Let's go back to this." He came back the day after he found out Pushing Daisies wasn't coming back. And he was just so gung-ho about the show. He came back with all these ideas, so excited.

And I think that really invigorated everyone, because the writers, ... we're all artists, and we are insecure in some senses. So when we hear the critics, the writers do take it to their heart. So with Bryan coming in, I think it gave them an uplifting momentum and energy, and I think it's such a big morale boost to everybody. There's a great synergy in the room right now. It's just a lot of excitement for new ideas.