Matt Damon (The Bourne Identity, The Adjustment Bureau) is poised to kick some future ass in Neill Blomkamp's (District 9) new sci-fi epic Elysium, and we finally have another look at the man in action, on the run with his future-tech gun.

This new shot is tighter than the last one we'd seen, and it gives us another good look at that Chem-Rail gun he's rocking. But more than anything we get a good look at the exo-suit tech, which was apparently made by future-Kawasaki.

Debate Club: The 5 most disappointing sci-fi movies of the last 20 years
Check out this killer Elysium concept art we wish we'd seen in the film

Here's the synopsis for what looks to be an action-packed take on class warfare:

In the year 2159 two classes of people exist: the very wealthy who live on a pristine man-made space station called Elysium, and the rest, who live on an overpopulated, ruined Earth. Secretary Rhodes (Jodie Foster), a hard line government ofﬁcial, will stop at nothing to enforce anti-immigration laws and preserve the luxurious lifestyle of the citizens of Elysium. That doesn't stop the people of Earth from trying to get in, by any means they can. When unlucky Max (Matt Damon) is backed into a corner, he agrees to take on a daunting mission that if successful will not only save his life, but could bring equality to these polarized worlds.

Check out the new pic below (click for larger): 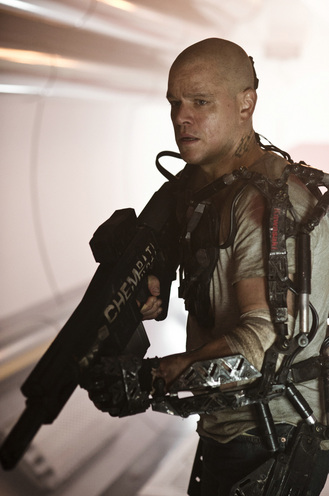 What do you think? Will you be watching?

(Via The Film Stage)