McG, director of the upcoming sci-fi sequel Terminator Salvation, told SCI FI Wire that he shot the film with an R rating in mind, but that very little—basically just a screwdriver stabbing—was sacrificed to secure the PG-13 rating it ultimately received. (That, and Moon Bloodgood's naked chest.)

In the film, John Connor (Christian Bale) and the human resistance wage a war in the year 2018 against an army of machines and Terminators, with the stakes upped even further by the arrival of a mysterious man named Marcus (Sam Worthington), who may not be what he appears. SCI FI Wire spoke to McG earlier this week by telephone, and the following are edited excerpts from our exclusive interview. Terminator Salvation opens on May 21.

Summer camp is invaded by aliens in the trailer for Netflix's Rim of the World
Kellan Lutz may be up for a role in McG's He-Man: Masters of the Universe

You're going with a PG-13 rating on this one. Some people aren't happy about that. What got cut?

McG: We shot an R movie, and at the end of the day we found that if we just cut back one shot of the Marcus character stabbing a screwdriver through the shoulder of one of these thugs it would warrant a PG-13. We thought, "Well, that would be ridiculous to make it tough for kids to go see this movie." We were inspired by The Dark Knight getting a PG-13 and being a film without any compromises. So we took the rating we got and ran for it. We never had to shoot for a rating. We were liberated by [Warner Brothers president of production] Jeff Robinov from day one, and I give you my word that there's no way that Christian or Sam or I, for that matter, would shoot a picture aiming for a rating. We never cared. We just shot what we thought was best, and, short of gratuitous gore, which I don't think furthers the story or furthers the characters, we didn't really have a problem with it.

Will that scene be an extra on the DVD, or will you cut it back in for an R-rated version for the DVD?

McG: I haven't decided yet. We're looking at the different ways to express the DVD. I think I'll include all the extra scenes.

McG: There's a topless scene of Moon Bloodgood that I thought was a very beautiful scene, that Moon thought was a beautiful scene, that we ultimately cut because we didn't want to fall into any of the cliches of the genre, like "Here's the scene where the beautiful girl takes her top off." I thought it was a soft moment between a man and a woman that was designed to echo the Kelly McGillis/Harrison Ford moment in Witness, for God's sake. They never touch each other; they just notice each other. But, in the end, it felt more like a gratuitous moment of a girl taking her top off in an action picture, and I didn't want that to convolute the story or the characters.

You've been putting the final touches on the film. How's it coming together?

McG: Some films, you get a first cut, and you think, "OK, we're very, very close." This film really needed to be worked on to get the characters to the exact place of arc that I wanted them. That was most critical. I always knew the visual effects would come in. I knew the sound would ultimately be designed well, but I wanted to really nail building with Marcus and building with Connor until they finally collide.

For you, what is Salvation ultimately about? 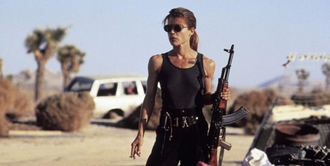 Linda Hamilton is back as the voice of Sarah Connor, and you directed the recording session. How did that go?

McG: It was extremely emotional. I know her a little bit. I didn't know her well. Just to be in the presence of Linda Hamilton and reflect on the waitress done good in the first one and, of course, those pull-ups in the psychiatric hospital in the second one, it was really exciting and humbling.

What do you think the fallout will be from Bale's incident on set?

McG: I think that people realize Christian is the consummate professional and a passionate actor. Truth be told, that whole thing falls on me. I encourage a very fiery, passionate set, especially because in a great many ways we were making a war movie. I was looking at Stanley Kubrick's Paths of Glory, and I was watching Hearts of Darkness, a documentary about making Apocalypse Now. And I was very involved in the duress that went into the making of those pictures. So I wanted a very physical set. So that was just a moment taken out of context. Everybody knows that Christian is [an] all-around good guy, just very focused on being the best he can be and doing what's right for the character.