McG goes deep about the “salvation” in his Terminator

McG, director of the upcoming Terminator Salvation, offered reporters a bit more insight into his film's central themes—among them sacrifice and redemption—and vowed that the movie would not wink at the audience, as did the last film, Terminator 3: Rise of the Machines.

"No, there's no chuckle," McG said in a group interview at WonderCon in San Francisco over the weekend. "There's very few chuckles in this movie. 'Talk to the hand,' Elton John glasses, that [has] no place in this movie. You know, [star Christian] Bale would have lit the set on fire. So, you know, we can't, we don't have that."

Summer camp is invaded by aliens in the trailer for Netflix's Rim of the World
Kellan Lutz may be up for a role in McG's He-Man: Masters of the Universe

McG also admitted frankly that several people suffered injuries, some serious, during the making of the movie in Albuquerque, N.M., last year.

Meanwhile, Yahoo! Movies unveiled some new images and new posters for the upcoming movie, which you can see after the jump.

Following is an edited version of the rest of our interview with McG. Terminator Salvation, which also stars Sam Worthington, Bryce Dallas Howard, Moon Bloodgood and Common, opens May 21. (Spoilers ahead!)

What does the "salvation" in the title mean?

McG: Salvation, you know, is just sort of forgiveness for sins, all right? And we start this picture with Marcus [Sam Worthington] committing a rather substantial infraction. In fact, he's ultimately put to death, which is how he ends up with some metal rods in his body. And he learns that people—he doesn't believe that—but he learns from hanging out with these people that everybody deserves a second chance. Look around this table—where would any of us be without a second chance? You know what I mean? And he's slow to understand that, but that's effectively the expression of salvation, and that's why we elected that to be the title of the picture. ...

I can't stand how excited I am about it. Let's just say that it involves time travel and it involves John Connor once again trying to galvanize the forces of those who think he's crazy. I'm just not going to tell you what period it takes place. So. ...

John Connor's (Bale) role is also one of salvation??

McG: Indeed, because basically we hear the tapes from Sarah Connor talking about surprise and immeasurable heartbreak and, most particularly, "You must save the boy who will become your father, Kyle Reese." That's the thrust of the movie, and you know, because of that, it creates a great deal of freedom. ...

What does John Connor mean when he says that this isn't the future my mother told me about?

McG: The future being malleable, no fate but what we make? Well, the point being she told him everything she could tell him about the future, and we've only been given the clues that the T-800s will indeed be there in 2029, and what's going on with this movie, that speaks to "This is not the future my mother told me about," guys, I don't know what to tell you, ... is the coming of the T-800 ahead of schedule. It'd be like all of us sneaking into Hitler's Nazi Germany and saying, "There's a bunch of V-2 rockets with nuclear tips, we better haul ass back to Allied Command and tell them this is a serious game-changer. If these things go online, we've got a major, major problem." So that's the future that my mother never told me about. The fact that, you know, here comes the T-800 10 years prior to 2029, and we don't have our act together to a high enough degree to fight them with any effectiveness.

Was Anton Yelchin's character of Kyle Reese modeled on Michael Biehn's portrayal in the original Terminator?

McG: No, really, this is a story about Michael Biehn's character Kyle Reese as played by Anton: seeing that people make sacrifices so that others may live. He witnesses that act at the end of the movie, and it's a precursor to "Hey, 10 years from now there's going to be a moment when they sit around and go, 'We need someone to go back and save Sarah Connor, and by the way, if you go back, you can never return to this world. Say goodbye to the ones you love, say goodbye to [everything]. Once you go back, that's it. It's curtains.'" And he, of course, you know, indeed dies as well. And as a function of what he saw first-hand in this film, he has the courage at that moment to say, "I'll go. I'll go." And this is why he became that guy. Which I like very much. ... 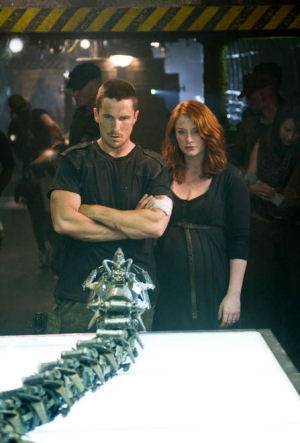 There've been a couple of injuries associated with the shooting?

McG: Yeah, I mean our special-effects guy, a guy named Mike Menardis, who did Tropic Thunder and did our film, basically had his leg severed off, and they had to reattach it. He was hit by one of his own special effects—you'll see when they escape the minefield, they kick open this sort of manhole cover, and it goes tumbling and tumbling and tumbling, and it went off inadvertently, and it caught him right in the bottom of the leg, and it just absolutely shattered his leg, and they had to reconstruct it, and for a minute there they thought that he was going to lose his leg. You know that Christian broke his hand, Sam hurt his back. Everybody really took their licks.

But that comes from the philosophy of a tactile experience. I say with respect, I didn't want that Star Wars experience of everything's a blue screen, [on C-stands with] tennis balls, and go for it. I had Stan Winston build all the machines. We built all the sets, the explosive power, the explosive power so you feel that wind and that percussion and that heat blowing your eyebrows off. And with that you get a couple bumps and bruises on the way, but you get it in an integrity and a realism that hopefully echoes Apocalypse Now. You couldn't say, "Let's just shoot Apocalypse Now in Burbank, I think it's going to feel just as good." No way. You had to go there and lose your mind and, you know, [Martin] Sheen had to have a heart attack, and you had to fire [Harvey] Keitel and you had, you know, [to] have the rebels take your helicopters and tsunamis blow down your sets. That's the grit that gave the film the realism that blew us all away.