Medium to raise zombies, other surprises coming up

Glenn Gordon Caron, executive producer and show runner for Medium, announced plans for the show's Halloween episode this year, which will air just before Oct. 31. Based on an old idea he had for Moonlighting but never got around to doing, Caron got the rights to the original Night of the Living Dead, into which the show will insert Allison Dubois (Patricia Arquette).

"It's going to be the landscape of her dreams in that particular episode," Caron said in a press conference today in Pasadena, Calif., as part of the Television Critics Association summer press tour. "It's actually the vestige of an idea I had back in Moonlighting. We bought the rights to this old AIP movie, Mothra vs. Godzilla. We were going to matte Bruce and Cybill into it. We never got around to it. This year we actually got the rights to the original Night of the Living Dead, and we're going to insert Patricia into it."

Star Arquette added her excitement for the Halloween episode. "I was so excited about it, because I love that movie," Arquette said. "When I was a teenager, it was kind of like you start breaking away from the establishment and your parents, you find these jewels. After school, it'd be on at a weird time. [You'd escape from] the hot California sun watching this weird movie. Also, I started out in horror films, Nightmare on Elm Street 3. I love a good monster movie. I'm here in a monster show. I'm the monster, but it's exciting."

As for the show's upcoming season, during which it moves to CBS and Friday nights, Caron offered a few spoilers.

The cliffhanger of Allison's coma will resolve when Medium returns: "She comes out of the coma and she's on a different network," Caron deadpanned. "It's the damnedest thing." 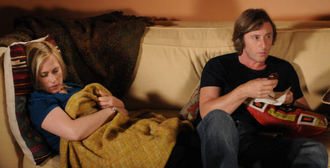 The new CBS incarnation of Medium will also feature big-name guest directors, including Marc Webb, director of the indie hit (500) Days of Summer. "Marc Webb, one thing he wants to do is direct an episode of Medium," Caron continued. "He's going to come play with us."

Otherwise, Caron doesn't have specifics about upcoming weekly mysteries. "We mix it up," he said. "Ours is a show that we really try to leave ourselves open to the possibilities that come along as opposed to locking ourselves in with a game plan, particularly because we have three young people who are constantly growing."

Caron responded to questions about the move to CBS as well. After the CBS Entertainment president blamed NBC for mistreating the show earlier today, Caron clarified his views on Medium's original home.

"I think we're all incredibly grateful to NBC," Caron said. "We were on their air for five years, and nobody wants to take shots [at each other]. I think there were times along the way when everyone, even inside NBC, thought, 'Gee, maybe if we gave it more attention, more publicity, it might do better, bring more viewers.' I don't think there's been any great secret there. We had five fairly fruitful years at NBC, so looking back, could things have been done differently? Absolutely. I make jokes about NBC making us walk here. [NBC exec] Ben [Silverman] said some harsh things I'm sure he regrets about our show. It's all part of the give and take of the broadcast business, but we're grateful to NBC. We had a good run there. Good news is we're on CBS now."

CBS's commitment will benefit Medium in a practical way, added Caron. "For the first time in three years, we're doing 22 episodes," he said. "We know when we're premiering. That's a luxury we've not had for three years. Those are the sorts of things that are frustrating [at NBC], but it beats not working."