He doesn't have Edward James Olmos' stoic presence or his deep, gravelly voice, and yet Luke Pasqualino has taken on the role of a young William Adama in the new web series Battlestar Galactica: Blood & Chrome and is making it his own. The 10-episode web series premiered today on Machinima Prime with the first two episodes, which start a brand-new adventure that takes place between Caprica and Battlestar Galactica.

The English actor ... YES, he's English ... realizes that he has some very big shoes to fill when it comes to playing the iconic sci-fi character. "I didn't even really know too much about the franchise before I booked the role, so I did my research after the role was offered to me," said Pasqualino in an exclusive interview with Blastr.

"Going in, I knew I had big shoes to fill, and a lot of challenges doing the American accent and all that stuff. But it was great. It was a great experience and one I'll never forget. We had a great team of people around us, like David Eick and Michael Taylor. Really helped me out with stuff. And Jonas Pate, who directed and executive-produced; he was a huge help as well. It was just a really nice team effort. Everybody helped each other out."

In Battlestar Galactica: Blood & Chrome, William Adama is a young hotshot pilot itching to get into the first war with the Cylons. He reports to the Galactica ready to kill "toasters," but ends up on a "milk run." The mission, however, ends up putting him and his battle-weary co-pilot, Coker (Ben Cotton), unexpectedly into the middle of the action.

"When I was first on board, during our prep week before we started shooting, Jonas Pate, the director, said to me, 'We're doing Top Gun in space. That's what we're doing here, is Top Gun in space.' Having that kind of vision in my head, that's where I knew we were going with it. It was very different. I think a lot of the motivation for me was to know that you're playing this slightly cocky, slightly cocksure Adama," said Pasqualino.

"I didn't want him to be too cocksure, and I didn't want him to be not cocksure enough. The Adama character in Blood & Chrome knows right from wrong. He's not against authority at all. He knows what he wants to be. He wants to be a pilot. I think just to follow a young Edward James Olmos character, to follow the young hunger that you get as an early 20-year-old in anything you do, really, even seeing parallels with my career now, you hunger for it," he said. 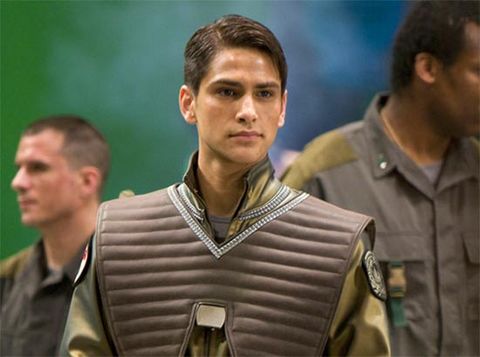 In order to get caught up with the Battlestar Galactica of it all, Pasqualino watched both seasons of Caprica, did a lot of research and was put in touch with Olmos. "We were emailing backwards and forwards, so he was giving me a bit of help. So just trying to get different pieces of the jigsaw puzzle together, little bits here and there, and then just trying to put something together and make it fit, really. But I didn't really go on to watch Edward James Olmos' work, just because that's all set in the future and I didn't want his performance to affect my representation of the material," he said.

So what advice did the Oscar-nominated, Emmy-winning actor give Pasqualino?

"I think he knew where I was coming from and he didn't want to direct me in that kind of way. He didn't want me to be him. I think he knew that as an actor I had to bring my own element to it. But he was just really supportive. He said to just go in, have fun, and all that kind of stuff," said Pasqualino. "It was great. It was brilliant. He was very supportive. He was a gentleman, really. Really helped me out. Just gave me the confidence to go in there and attack every line with the conviction of knowing who your character is. So that was pretty much it. It was a great help."

And he's thrilled about the evolution of his William Adama. "I wanted him to be a normal human being. A normal human being doing a bit of an extraordinary job, really. And I just didn't want him to be straight down the line. I think we need to see Adama's flaws as well as his ... what's the word I'm looking for? As well as his triumphs, really. That just adds a completely different layer to the character. To bring him up from this early 20-year-old stage, to take him through the trials and tribulations you get at that age, as well as trying to find yourself and trying to find your feet. I think it's a tough age. But it's one of those things that the story tells it all itself, and as the webisodes progress, I think Adama's story becomes much more evident and much clearer, really, for the audience to see," he said.

One challenge he had was dealing with the American accent. Pasqualino said he grew up watching shows like The Fresh Prince of Bel-Air and My Wife and Kids and "all those different random American shows," which allowed him to develop an American accent. "But I did say on set to my director, Jonas, and my costar, Ben, 'When I slip, just pull me up on it and let me know what the correct pronunciation is.' So in the end we did get there. They did have to pull me up a couple times," he said.

Another challenge was that nearly everything was filmed against green screen. "I never wanted to look at the color green again when I'd finished," he said with a laugh. "No, it was great. The first time I'd ever really worked on green screen to that kind of scale, and it was brilliant. It taught me so much about acting in general. Just little things. It proved difficult at times, where we'd have the director screaming at us saying, 'Okay, there's something flying over your head now.' That added a different layer, when in the end we've got a tennis ball at the end of a stick, and we were just looking at that. But it was good, it was good," he said.

He admits he's beginning to understand what being in the latest incarnation of the Battlestar Galatica franchise really means. His research helped him understand the story, but "I never knew how die-hard some of the fans were. I think to work on anything where you've got people that can really relate to the material, relate to the story, relate to the characters, for every piece of that puzzle to fit so well, and for it to be loved so much. It really, truly is an honor. And to play such a legendary character, it's not just a character that somebody's written into a script. He's an icon, the Adama character. My agent bought me a William Adama doll from the '70s when I booked the role. It was like, this is a big deal to be part of it and actually to be playing the lead. It really does mean the world to me. It really does," he said.

The 10 webisodes will run on Machinima Prime on YouTube through the end of the month, and Battlestar Galatica: Blood & Chrome will also on Syfy in early 2013. There's also the DVD, which will be released in February.

Beyond that there's a possibility we could see more Blood & Chrome on the web in the future. Pasqualino admits that'd be just fine with him.

"I would absolutely love to continue the story. ... And if it makes it to a series, great. There's nothing I'd like more than to take the Adama journey further and to carry on in this line of work. I had great fun making the pilot, and I think I'd have an even better time making a series out of it. I think we only grazed the surface in the pilot, and I think there's so much more to give to this young Adama character," he said.