Meet Terminator's Sam Worthington: You'll be hearing more about him

Sam Worthington, who stars as Marcus Wright in Terminator Salvation, told reporters that landing the lead role in James Cameron's 3-D sci-fi epic Avatar helped put him in the running for the role of Marcus.

McG discovered Worthington after meeting with Cameron while he was shooting Avatar. (Though Worthington completed Avatar first, it doesn't come out until Dec. 18, in part because of its elaborate post-production.)

Drop in on Pandora with Dark Horse's new Avatar sequel comic series, 'The Next Shadow'
Glowing plants engineered with lit genes will make you feel like you live in Avatar

"I'd say it would have helped, wouldn't it?" Worthington said in a group interview last Friday in Beverly Hills, Calif. "I mean, you'd be silly to think it didn't, because I think obviously people are going, 'Well, who's this guy that Jim's working with, and what else can he do?'"

Terminator Salvation makes it to theaters as most audiences' first introduction to Worthington. The Perth native has been at work for 10 years in smaller roles or in movies that were lower-profile than his 2009 double feature. In Salvation, Worthington plays Marcus, who hooks up with young Kyle Reese (Anton Yelchin) while wandering the desert of the future and ultimately intersects with John Connor (Christian Bale).

Worthington shared a bit of background and a few Terminator anecdotes to help viewers get acquainted with him. The following Q&A features edited excerpts of our group interview. Terminator Salvation opens May 21. (Spoilers ahead!)

How is your life changing this year?

Worthington: Well, I think the world changes around you. I think you don't change. That's as simple as that. I think if I changed, my mates are going to kick me in the ass. You know, I'm 32 years old. If I was 22, it probably could go to your head, but as far as I'm concerned, as long as it doesn't affect my work, and I can keep producing a quality that gets you the work with the likes of McG and Jim Cameron, then I'm doing OK.

What was the toughest thing to do on Terminator physically?

Was there more makeup or computer graphics to show Marcus getting damaged and dinged up?

Worthington: It's been, depending on how un-repaired we were, anywhere from four to six hours where they do the outline and then paint you blue so you look like a Cirque du Soleil Terminator. But that wasn't a hard one. You're sitting there for six hours. I would pity the poor guys doing it. They're the ones having to work for six hours. I just have to sit there, and they make you look good. 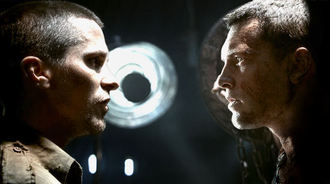 Are you concerned that Marcus might not be back for a sequel?

Worthington: Well, we only made one movie, and we set out to make Terminator Salvation. You're not really thinking of five and six and seven and eight and nine, so you're just trying to make the best movie you can at that time.

Are you signed on for more?

Do you think Marcus could come back?

Worthington: Well, I've got an idea. They don't know it yet. I'll tell McG during this junket. In my head, it's crazy, it's unbelievable. We'll figure it out. The good thing is we've got the luxury of time travel, which was introduced in the first and the second one. So who knows? It depends if people want Marcus to come back. That's the other thing.

How many different endings did you shoot?

Worthington: We discussed about three or four, I think, depending on the day and what sat well with all the actors and the people involved, depending on which one we went with. But I know we discussed a hell of a lot of endings.

Are you an Arnold Schwarzenegger fan, and have you met him?

Worthington: I haven't met him. Hopefully I'll meet him this week. That's what I'm hoping for. ...

How did you get into acting in the first place?

Worthington: Well, I was a bricklayer. I built houses. Then, when I was about 19, I traveled around and met a girl who wanted to go to the premier drama school in Australia, where Mel Gibson went and Cate Blanchett [National Institute of Dramatic Art]. I auditioned with her out of moral support, but I got in. She didn't.

How mad was she?

Worthington: Well, she dumped me a week later, and that was the end of that relationship. But I didn't know Shakespeare or what wings on a stage was. I thought Chekhov was on the starship Enterprise. I didn't realize he wrote plays. So you're a sponge, you take in everything, and after three years of studying, you then go out and learn how to act. It's as simple as that.